When ‘nuisance flooding’ is part of a city’s vocabulary, there’s a problem 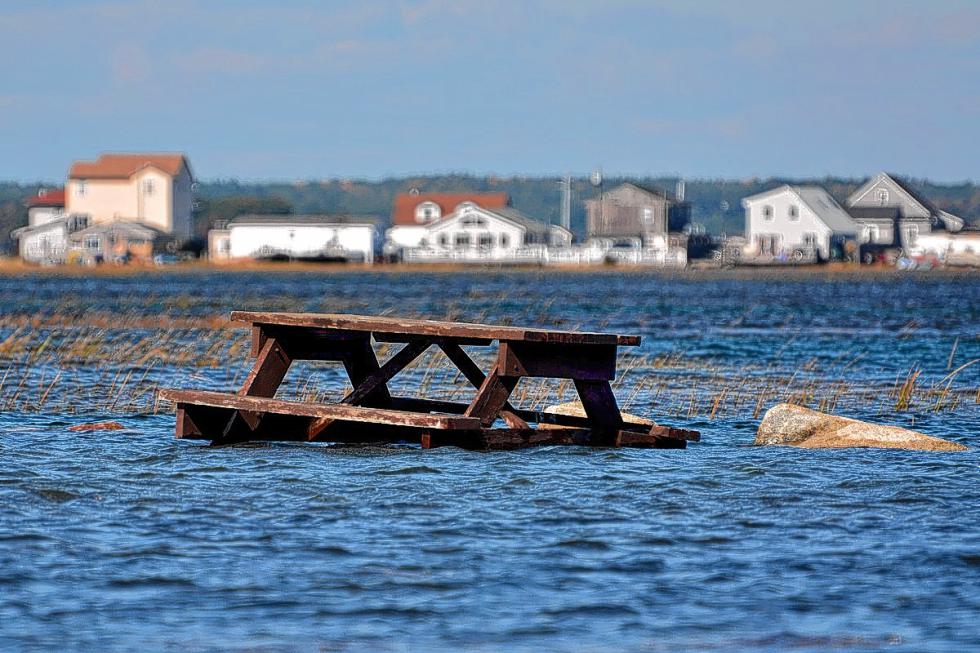 Courtesy photo by Ron Sher This picture from Seabrook beach was a winner in a contest by the Gulf of Maine Council to show the effects of a October 9, 2014, "king tide." High tides during a full moon have always been high, but they are becoming a problem in many coastal commnities due to sea-level rise.

Conferences about climate change tend to focus on atmospheric molecules and energy density, but an interestingly different conversation this past weekend in Hampton centered on building codes and cigarettes.

Cigarettes? I’ll get to that in a minute.

The conference was called Rising Tides 2015, and it tried to sidestep the political differences that make climate discussions so contentious by concentrating on high-water problems in coastal cities throughout the country. You wouldn’t believe how many times I heard somebody say “flooding doesn’t care whether you’re Republican or Democrat.”

That’s fine and dandy, but the conference’s real impact came because participants weren’t the usual mix of activists, researchers and journalists who live in the world of high-level generalities. Rather, it was mostly made up of local elected officials who live in the here and now, including 20 mayors from coastal cities you’ve never heard of, like Dauphin Island, Ala., and Astoria, Ore., who swapped stories ranging from frustration with the federal flood insurance program to ideas for coping.

Like many, Zimmer expressed frustration with our history of emergency response, which begins after the emergency hits.

She talked about Hoboken’s efforts in the past few years to prepare for the next Sandy not by building giant seawalls but by doing things like outlawing new construction along the shore – which has embroiled the city in a huge lawsuit with a thwarted developer – and changing building codes. For example, new high-rise buildings must put elevator motors on the third floor or higher rather than in the basement, which is cheaper, so that people won’t be trapped 200 feet in the air the next time water flows through the city.

And boy, does it flow through the city.

Hoboken has suffered eight floods since Sandy despite the lack of East Coast hurricanes, Zimmer said, due to higher tides from sea-level rise and more freshwater flooding due to an increase in storms.

“We get more heavy rain events. If we get a deluge when we have a high tide, we get flooded,” she said.

That situation is so common around the world that a whole vocabulary has been developed for it full of terms like “king tide,” referring to a high tide that comes during a full moon and thus is higher than average.

As the ocean rises, king tides increasingly overtop causeways in places like Miami Beach even without an accompanying rainstorm. They pose enough of a challenge hereabouts that a project called Gulf of Maine King Tides has been developed to help us prepare. “It is possible that by 2060 we could experience tides of the magnitude of king tide events every month due to sea-level rise induced by climate change,” warns the project at gulfofmaine.kingtides.net.

Other terms tossed around with abandon at the conference included “velocity zones” – places in the path of high winds during expected storm patterns – and “base flood elevation,” a measure of average flooding in a given location that helps determine how much insurance coverage is possible. (When somebody said “base flood elevation” during a panel discussion, every single mayor in the room groaned.)

Best of all from the linguists’ point of view is the deceptively casual “nuisance flooding,” when the ocean fills your streets and sidewalks with water but doesn’t actually wash any buildings away. The mere existence of that phrase shows the problem is real, which explains why.

Admittedly, no king tide is ever going to hit Concord, but we can’t be complacent. Remember Hurricane Irene?

Last month I was in the Pemigewasset Wilderness, about as un-coastal an area as you can imagine, and it had only just that week replaced some bridges washed out by Irene. We have plenty of potential flooding problems, too.

You’re probably waiting for cigarettes to enter the picture. They came from retired Navy Admiral Jonathan White, who gave a speech about climate change concern in the services, where he said denial can’t be found: “In the military world, we are convinced.”

Like many, White lamented society’s difficulty in grasping the idea of climate change and facing up to the costs we’ll have to assume and the habits we’ll have to change. But he found reason to be hopeful as he reminiscenced about the bad old days when lit cigarettes were everywhere in America.

“We need to learn how to turn data into decisions,” White said.