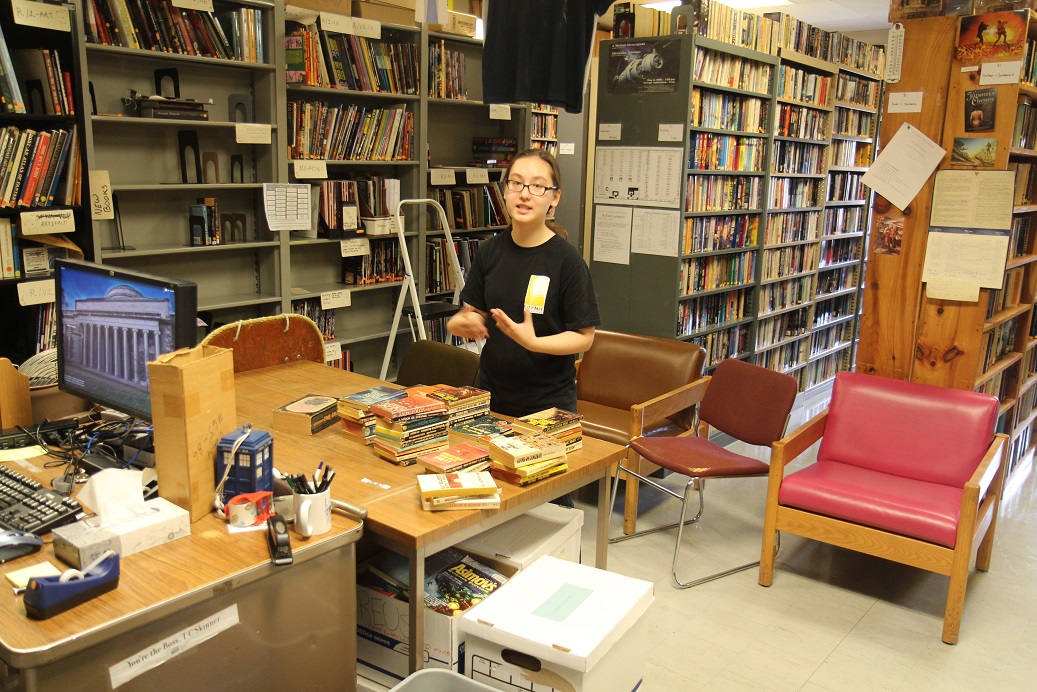 Cathleen Nalezyty, a senior at MIT and president of the MIT Science Fiction Society, looks through my paperbacks in the student group's library on Dec. 11. (DAVID BROOKS / Monitor staff)

If you must carry a backpack full of paperbacks on the subway and don’t want to look conspicuous, may I suggest doing it on the T’s red line through Cambridge, Mass., where every third passenger is heavily backpack-laden.

It worked for me when I lugged 18 pounds of books to the MIT science fiction library last week. Nobody looked twice at my enormous burden, although that might be because they were all staring at their phones.

My books got more attention on the fourth floor of a building with the very MIT-ish name of W20, where Cathleen Nalezyty, president of the MIT Science Fiction Society, carefully went through my 52 paperbacks, all twice or three times her age. They ranged from novels you’ve heard of (Fahrenheit 451) to novels you haven’t (Starship by Brian Aldiss) to collections of short stories such as “Off the Beaten Orbit” from 1959, which is the perfect title for an anthology in the days before s-f took itself too seriously.

It was quite a mishmash, but Nalezyty, a senior, wasn’t fazed. Her years amid the 67,000 volumes in the library means she has grown used to gray-haired guys unloading tales of space aliens and time travel from their youth.

“We get these emails all the time: ‘I went to MIT 40 years ago and I’m trying to downsize. Are you interested in my collection?’ ” Nalezyty said. “We say, ‘Sure, we’ll take anything, as long as you can get it here.’ ”

That’s my story exactly, except for the went-to-MIT part. The kids are grown, and we’re trying to weed out the detritus of life, including the books that attached themselves to you like literary zebra mussels. I’ve been going through bookshelves for a couple of years, tossing some and keeping some, and finally got to the science fiction up in the guest room.

My collection dates from the 1960s and 1970s, before cyberpunk brought darker hues to the stories, and long before computers and the internet put geek culture in the mainstream.

Plot was everything in science fiction then. I found clever twists and intriguing science galore, but style, character development and sheer poetry – you know, the stuff that makes fiction worthwhile – was largely lacking. Things are much better in the field these days, I’m happy to say.

So I decided that everything in my collection must go. Well, everything except Asimov and Heinlein; there are limits.

Rather than put these aging gems on the free-book table at the town dump, I lugged them to MIT. Soon they’ll join the society’s science fiction and fantasy books by everybody from H.G. Wells and Anne McCaffery to Charles Stross and Cory Doctorow, not to mention thousands of old s-f magazines in bound volumes, plus a few oddities like Shakespeare plays in Klingon.

It’s all part of the vast and growing literary collection of the 66-year-old MIT Science Fiction Society, a student-run organization.

Once small enough to fit in a wooden box (they still have the box) the collection now fills two medium-sized rooms on floor-to-ceiling bookshelves, plus part of a warehouse in East Boston, and is expanding like tribbles in a ship’s hold. They’re hoping for more space once MIT builds a new dorm and student activities building, although Nalezyty noted, “space at MIT is a complicated political struggle.”

The library is open to anybody for reading, while the club’s 400 paying members can check out books. This is a library, not a museum, so everything except a few of the oldest, rarest items are available to read. The selection can be overwhelming.

“People sometimes come in and say, ‘I’ve finished a series; what should I read next?’ That’s a hard question to answer,” said Nalezyty, gesturing at the stacks around her. “Fantasy? Science fiction? Do you want soft science, hard science? Do you care if the physics in the story isn’t exactly right?”

From the science fiction history point of view, the collections’ gems are bound copies of old magazines, including the iconic Amazing Stories dating back to the 1930s. I flipped open one at random and found a story by E.E. Smith, which is like opening a notebook at the Museum of New Hampshire History and finding that it’s by Daniel Webster.

But what’s really of value here is the completeness. Science fiction and fantasy writers like to create series of books, and the MIT Science Fiction Society has pretty much all of them. I saw one estimate that it has 90 percent of all English-language science fiction ever published.

“We sometimes hear from researchers. They’ll say, I’m in Boston for a conference and I wonder if you can help me find this story,” Nalezyty said.

It makes sense that MIT would house this collection, although the school has more non-geekery than its reputation would suggest. Nalezyty, for example, will have a degree with the interesting title of humanities and engineering.

So don’t be intimated. If you have any interest in written science fiction, I’d suggest a visit. The hours are a little odd, so check the website (web.mit.edu/mitsfs) – which, by the way, is the most outdated site I’ve seen since I stopped using the Mosaic browser. But the information’s there even if it’s not elegant; like a lot of early science fiction, that’s what matters.

And if you’ve got books to donate, bring them along. The Kendall Square T stop is the closest.