Science Cafe Concord explores science of addiction, with a side of wings 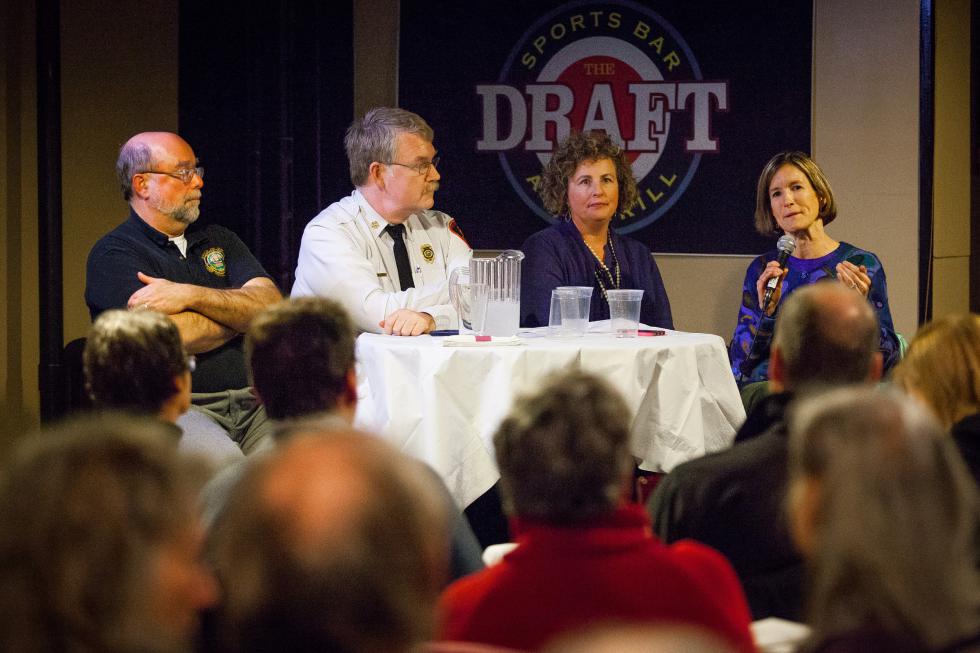 What exactly is an overdose, and why do some people die from it, while others do not?

“What physiologically is going on?” asked an audience member Tuesday evening during the launch of Science Cafe Concord, the popular discussion series moderated by Monitor reporter David Brooks.

Dr. Thomas Andrews, the state’s chief medical examiner and one of four panelists at The Draft Sports Bar downtown, grabbed the mic.

“In addition to stopping pain,” he said, “it – it being an opioid – will substantially reduce your respiratory system, your reflexive in and out, up and down of the diaphragm. The more prolonged that respiratory depression is, the longer your brain is deprived of oxygen.”

“Tissues,” Andrews added, “do not do well without oxygen. Once that vicious cycle starts, entire systems will shut down.”

Perhaps no one in New Hampshire knows that better than Andrews. Just this week, his office announced that more people in the state died from drug overdoses last year than ever before – 385, a number that is expected to surpass 400 when all cases are completed.

Those grave trends are by now well documented. But Concord’s Science Cafe, an expansion of the long-running Science Cafe New Hampshire program, offered a chance for the public to dig into another angle of the epidemic: the science behind opioid addiction.

Tuesday’s wide-ranging discussion touched on everything from common addiction myths, to signs of overdose, to the combative side-effects of reviving victims with the overdose-reversal drug naloxone, also known by its brand name Narcan.

“I have only been hit twice in my career,” said Concord fire Chief Dan Andrus, a certified paramedic. “A lot people find that really surprising – I think a lot more have wanted to – only two patients have actually connected with my face.

“One of those was a young man who upon our arrival was not breathing and completely unconscious. . . . I gave him two milligrams of naloxone and he snorted awake. Within the space of about three seconds, he sat up, punched me, knocked me over on my back, grabbed the IV bag and jumped out the window.”

He continued with a warning for anyone who tries the same revival technique: “One of the pieces about naloxone that needs to get out: Yes, naloxone is a miracle drug. It does wonderful things for the patients. But it also takes away that high, and it can induce a really potentially violent withdrawal reaction in them.”

Dr. Molly Rossignol, an addiction specialist at Concord Hospital, responded to a question about drug use by pregnant women by confirming that yes, damage to a baby happens directly from the drug, rather than just its indirect effects, like reduced oxygen to the blood.

“It definitely crosses the placenta,” Rossignol said. “And in fact, when babies are born, it’s about a 60 to 80 percent chance that baby will show signs of withdrawal.”

She noted that, unlike popular assumption, babies do not leave the womb with addictions. “Babies are dependent, though, on opioids, if they’ve been exposed in utero,” Rossignol said. It’s also a good time to get people help.

“Pregnancy is a really great time to get someone into treatment,” she stressed.

Rossignol cautioned people to expect treatment plans to fail on the first attempt, no matter how great they sound.

“Relapse is the rule, not the exception,” she said, highlighting the need for continued support as well as better prevention efforts. “It’s been said on a national stage, ‘You can’t arrest your way out of it,’ ” Rossignol noted. “You can’t treat your way out of it, either.”

The outlook of the panel, though, was mostly positive.

“I’m a natural born pessimist,” Andrews said. But he added that he was continually “amazed” at the resiliency of those touched by the epidemic, and the work they continue to do on behalf of their loved ones, and those they may never meet but are connected to just the same.

“As vicious a price as we paid for the expansion of this problem,” Andrews said, “what this has done, though, is unleashed an army of advocates.”

(Jeremy Blackman can be reached at 369-3319, jblackman@cmonitor.com or on Twitter @JBlackmanCM.)