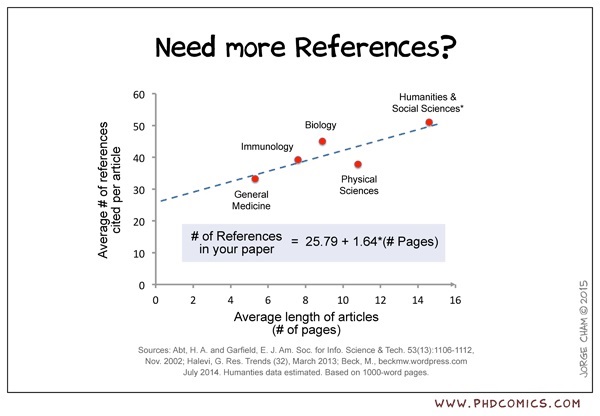 The web comic Ph.D. has made fun of graduate-student life for many decades and even produced two short movies based on long-running characters. It’s a fun comic, well worth following – check it out here.

Every now and then, it provides some insight into real science. Like today’s comic, which shows the surprising result that social science research papers have more references on average than biology or physical science papers – as the chart above demonstrates.

Those who are dubious of the “science” in “social science” might scoff that it’s just window-dressing, reflective of the physics envy that pervades many research fields. But it could also reflect the fact that social science are way more complicated than physical sciences because the objects of study have many, many more variables. Every electron is identical, but every human being is different, which is why studying humans is much messier than studying electrons.