Honeybees are hurting, but wild bees and other pollinators need our help, too 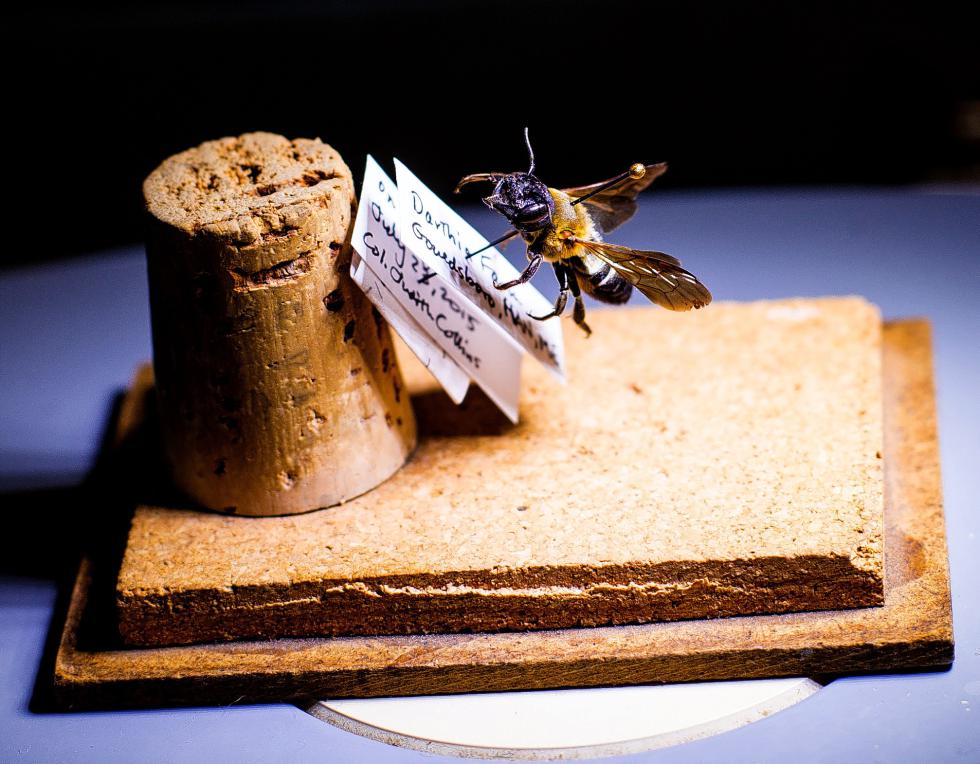 A giant resin bee--an invasive bee--is pinned under a microscope for people to look at the New Hampshire Pollinators Conference, at the Grappone Center on Monday. The conference discussed ways to support natural pollinators as well as honeybees. (GEOFF FORESTER / Monitor staff)

Confession is good for the soul, they say, so let me confess some apiary sins: Three times over the past decade, my family beehive has failed to survive the winter.

That’s at least 100,000 insects who have gone to meet their maker under the Brooks family watch. Shameful, although not entirely unusual in this era of parasites, diseases and colony collapse.

No wonder I’ve become a fan of natural pollinators – the wild bees, butterflies, wasps and flies that can pollinate flowers, fruits and vegetables without needing man-made structures to make it through to spring.

I’m not alone. There’s a nationwide push to support natural pollinators that has been building for years. It has been spurred by the mysterious decline in industrial honeybee populations, which has more than quadrupled the price that orchards and farms pay to rent a beehive during pollination season and raised alarm in agricultural circles.

“Colony collapse was a trigger; all the issues really came together,” said Seth Wilner, an extension agent in Sullivan County and owner of a small vegetable farm.

He can list a number of farms that have saved money or increased income by creating and maintaining pollinator-friendly plantings and practices. “When they start rolling off your tongue, you know it’s real,” he said.

Wilner was among 250 people who came to the Grappone Center in Concord on Monday to hear about millennium-old hedgerows, pesticide timing, solarization (which is not what you think it is) and plants with names like, so help me, Common Sneezeweed and Beggar’s Tick.

It was all part of the New Hampshire Pollinator Summit, sponsored by several state and federal agencies. Many states are holding similar summits, triggered by last year’s presidential memorandum titled “Strategy to Promote the Health of Honey Bees and Other Pollinators.”

The majority of attendees in Concord were beekeepers, presumably ones more successful than me. But a number of other folks attended, including some farmers and some you might not expect – such as Bill Price, owner of TurfPro Landscape Maintenance company in Belmont.

“People want to have nice lawns and they still want to have pollinators,” Price said. “They ask what effect will this have on the environment in general, so we’re trying to do the research.”

The big lesson, he added, is that “timing is everything.” If you must have pesticides or herbicides, applying them at times of the year when wildlife are least affected can make a big difference.

Also present was Eric Mader, who co-directs the pollinator program for an Oregon group called The Xerces Society for Invertebrate Conservation, which is “the Audubon Society for insects.” (Xerces is the species name of the first butterfly in North America to go extinct from habitat loss.)

Mader gave a talk that included a depressing litany of problems, such as the fact that about one-quarter of the wild bumblebee species in America are threatened with extinction, but also a litany of hopeful developments in our understanding and how to preserve and encourage these useful insects.

The key takeaway from talks by him and other experts is that maintaining a variety of flower-bearing native plants – many of which have long been dismissed as weeds – is the main thing ordinary people, as well as farmers, can do to support natural pollinators.

Variety is necessary because the environment needs to provide pollen, these insects’ main food source, all throughout the year.

“We have to have blooming plants present before and after crops if we expect pollinators to survive, to be present to make a significant addition to pollination,” Mader said.

Field studies increasingly show that such practices not only increase pollination of crops, without the need to hire beehives, but also lead to natural pest control with fewer chemicals. Mader said he consults with national food companies that “increasingly are looking at pesticides as an outmoded and outdated technology.”

“New Hampshire is taking it a whole ’nother level,” he said.