This primary, #LookHowIVoted is a legal hashtag, as presidential ‘ballot selfies’ arrive 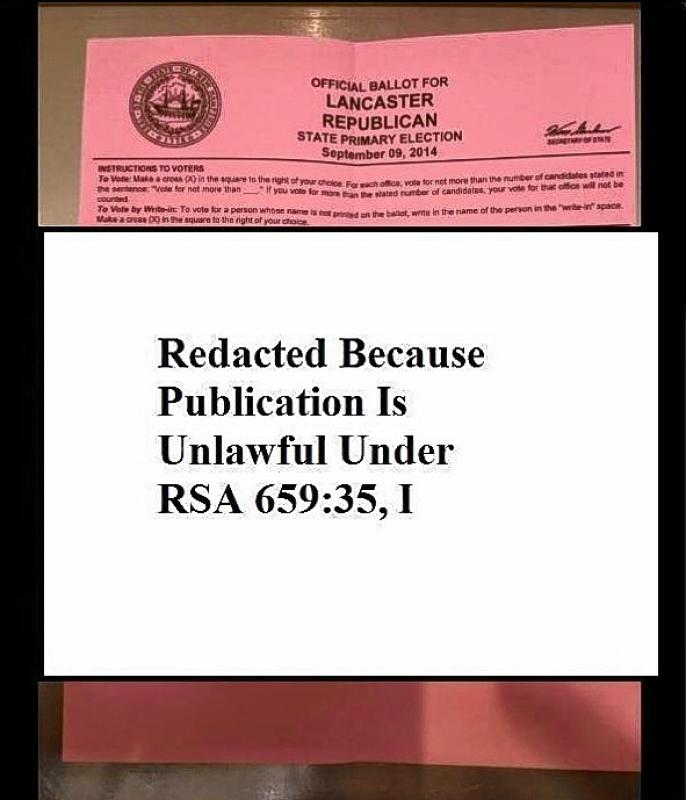 The 2014 lawsuit filed by the ACLU that led to the state's "ballot selfie" law being struck down included this redacted version of a photo that State Rep. Leon Rideout posted to his own Twitter feed, showing his Sept. 9, 2014, party primary ballot. Un-redacted versions had run in newspaper stories.

Want another reason to be excited about today’s primary, beyond the whole helping-choose-the-leader-of-the-free-world thing?

How about this: You can legally take a presidential ballot selfie for the first time!

Last summer, U.S. District Court Judge Paul Barbadoro struck down the state’s law, which prevented voters from taking pictures of a completed ballot and posting it online, for the time being, ending a two-year argument over an unusual collision between social media and electoral tradition.

The law against what have come to be called ballot selfies was designed to keep people from being bribed or coerced into voting a certain way.

The thinking goes like this: If no photos of your ballot exist then nobody can confirm that you voted for a certain person, and therefore nobody will have an incentive to pay or threaten you to vote for that person.

Similar laws exist in many states and in other countries, but have increasingly collided with people’s expectations that since they can put photos of their meals, cats and footwear online, why not their ballots? In South Africa, for example, a prominent DJ was prosecuted for putting a picture of his ballot on Twitter, for example.

The New Hampshire law, titled “Showing or Specially Marking Ballot,” was on the books since the 1970s, long before social media or the internet, carrying a fine of up to $1,000.

Its confusing wording made its application to social media unclear until 2013 when questions were raised about photos of completed ballots posted online by some Nashua candidates and office-holders. New Hampshire Secretary of State Bill Gardner, who oversees elections, confirmed that it applied to ballot photos.

The law was made more specific in 2014 when the Legislature tightened the law to say: “No voter shall take a digital image or photograph of their marked ballot and distribute or share the image via social media or any other means.”

It apparently never led to any prosecutions, even after several people, including a couple of state representatives, went public with their own ballot selfies as part of their opposition to the law.

Rep. Leon Rideout, a Lancaster Republican, was among those who went public and were interviewed by the attorney general’s office, but no charges were filed.

“I believe with the court ruling the law unconstitutional all the cases were dropped,” he wrote in an email response to a query.

The American Civil Liberties Union filed suit in 2014, arguing that concerns about coercion or bribery were too theoretical to override people’s right to free expression.

Barbardero agreed in August, writing: “The Secretary of State . . . produced no evidence that either vote-buying or voter coercion are current problems in New Hampshire. . . . (He) has failed to identify a single instance anywhere in the United States in which a credible claim has been made that digital or photographic images of completed ballots have been used to facilitate vote-buying or voter coercion.”

However, the state has appealed that decision, so we have not yet hear the final word – or see the final selfie.