If there’s a gravity hill/magnetic hill in New Hampshire, I want to know about it 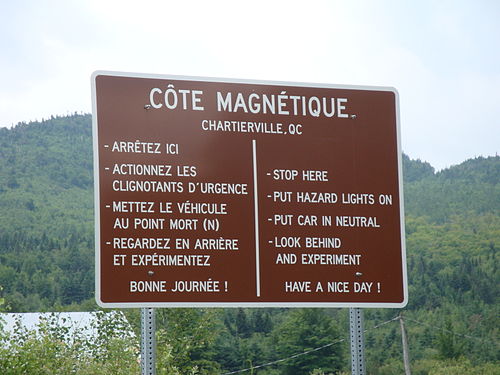 Photo from wikipedia - but I'm not embarrassed about using it, because I took it.

New Hampshire Public Radio has a program asking for listeners to suggest story topics. One recent suggestion was a gem: “On the on-ramp on I-93, there’s supposed to be a 1magnetic phenomenon1 where you go uphill when in neutral. Is it real?”

Alas, not enough people asked this question for them to investigate and NHPR wouldn’t release the question’s identity so I could immediately call and ask him*: Which on-ramp????

I asked the NH Department of Transportation is they had heard of any such attribute for any I-93 ramp, but I struck out. Bummer.

I love the topic of Gravity Hills, a.k.a. Magnetic Hills, a.k.a. Mystery Hills. As the excellent wikipedia article tells you**, these are optical illusions where the lack of expected clues can fool you into thinking downhill is actually uphill. I’ve been to a couple of these, including Cote Magnetique in Chartierville, Quebec, not too far north of the N.H. border, and they are awesome. Even though you know you’re being fooled, you can’t not see the illusion. Lots of fun.

There are zillions of them around the world as, once again, wikipedia will tell you, but so far as I know none identified in New Hampshire.

So I’ll have to ask you, gentle reader: Have you seen a good gravity hill in New Hampshire, either associated with the interstates or otherwise? If so, let me know at dbrooks@cmonitor.com!