U.S. electricity use is declining – but will it last? 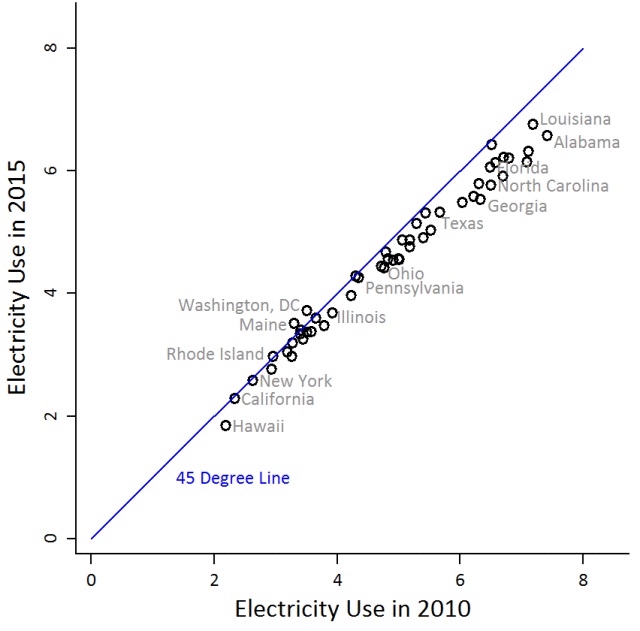 Source: Constructed by Lucas Davis at UC Berkeley using residential electricity consumption from EIA, and population statistics from the U.S. Census Bureau. Electricity use per capita is measured in megawatt hours.

Probably due to the adaption of LED lighting, electricity use in the U.S. is declining, separate from the bigger economic picture. The question is whether it will last, and this article from UCal-Berkeley says it’s too early to tell, if for no other reason than cheaper lighting may lead to a “rebound effect” in which we use more of it.

I found one of the charts in the article, reproduced above, fascinating. It compared electricity use per capita in 2010 vs. 2015 for all 50 states and D.C. Usage went up only in Maine, Rhode Island and D.C. – but to me the interesting thing is how much more electricity is used per-capita in the Southeast than in Northeast. (I don’t see N.H. on the chart). It can’t just be a function of heat leading to more air conditioning, because Hawaii is *way* down near the bottom – I suspect this is a reflection of energy efficiency prodded by state policies.