No, don’t put that plastic bag in your recycling 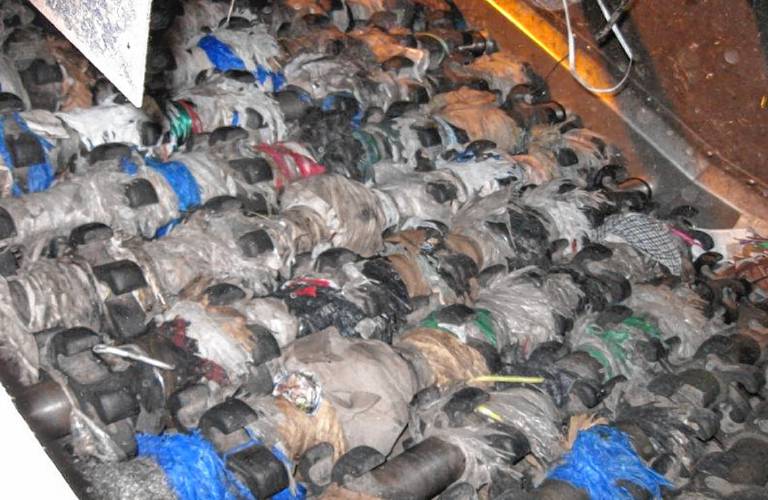 This is why you can't recycle plastic bags: They gum up the sorting machinery. (Photo courtesy Casella)

Concord has increased its efforts to keep plastic bags and plastic film such as cellophane or Bubble Wrap out of its recycling bins, and to have people to stop putting their recyclables inside plastic bags.

Using the slogan “One bin, no bags,” it hopes to convince people to keep what is officially called non-rigid plastic out of the recycling stream, even when the material carries the triangular recycling logo.

“Anyone can put that recycling triangle on anything; it doesn’t mean it’s recyclable in a municipal program. The logo really is unregulated,” said David Allen, Division Manager for Casella Waste Systems, the company that collects and processes Concord’s recyclables under a long-term contract.

Plastic bags can be recycled, which is why many grocery stores collect them, but they’re much harder to deal with than rigid plastic material, which is why Casella doesn’t want to take them.

The big drawback to plastic bags and plastic film is that they can snarl machinery being used to separate materials in a “single-stream” recycling program such as the one in Concord, which does not require people to separate paper, glass, plastic and metal. When this happens it greatly increases the cost of separating materials and makes it more likely that plastic might end up being accidentally bundled up with other material, especially paper.

Which brings us to China.

China has long purchased much of the world’s recyclable materials as part of its push to grow its economy, to the point that its decisions drive costs and practices for recycling all over the globe. Until a few years ago, China was tolerant of taking material that has a lot of contaminants, an industry term for something other than the material being recycled.

“They’ve brought down their tolerable contamination rates from around 3 percent, which was pretty hard to begin with, down to one-half of a percent,” Allen said.

This is far below the level that can be maintained by machines, especially if plastic film is part of the mix.

“It means you have add more human intervention rather than just mechanical intervention” if you want to sell the resulting bundle of material, said Fusco. “You’ve got to put human eyes on it, people to reach in and grab it, if it doesn’t belong.”

Hence the push to get consumers to keep plastic bags out of the recycling stream in the first place.

“We think education is better than enforcement. … Nobody wants to be the trash cop,” said Allen.

Concord recycling bins that contain “unacceptable items will be rejected at the curb and will be marked with a non-compliance sticker,” the city says in press material about the new program.

Unacceptable items includes recyclable material that is inside plastic bags. The pickup crew will not open the bag and remove the recyclables.

Concord produced about 3,500 tons of recycled material from the curbside collection in 2017, and another 1,300 from public and business collection bins and material taken directly to town facilities, said Adam Clark, solid waste manager for the city.

Casella separates all of Concord’s recycled material into various types of plastic and other materials at its huge automated facility in Charlestown, Mass., near Boston.

Concord is Casella’s biggest municipal customer in New Hampshire. Overall, Allen said, the company collects more than 50,000 tons of recycled material annually from businesses and government throughout the state and takes it to the Charlestown facility.

Allen estimated that transporting the material costs about $25 a ton, and processing it costs another $75 to $100 a ton. The sale price of different materials fluctuates, he said, but financial pressure is coming from low-grade paper, collected as a mix of junk mail, other paper, and thin, non-corragated cardboard.

This low-grade paper makes up a least a third of recycled material, but its price has collapsed since China cracked down. This is partly due to the decline of the paper industry in New England, which once bought a lot of such material to help make new paper.

“When the supply stays constant but demand goes way down – we know what happens to price,” Allen said.

Fortunately for the capital city, Concord is protected from this decline for the time being, unlike some cities and towns facing the falling price of recycled material. In 2015 the city signed a fixed-price contract with Casella that runs through 2025.

“Concord has one of the most robust recycling programs in the state,” Allen said