It’s not just us: Ticks and mosquitoes are spreading more disease everywhere 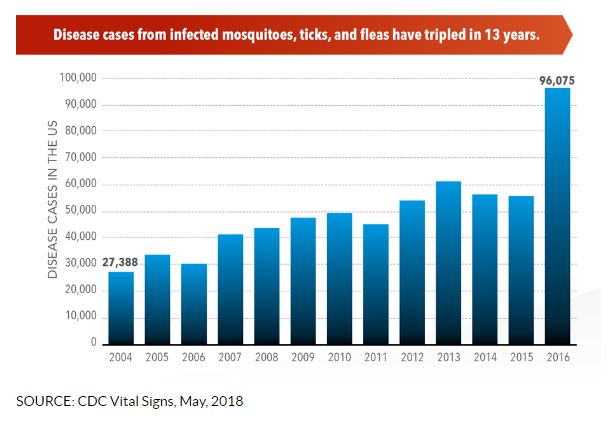 One of the most disheartening changes that New Hampshire has seen in recent years is the spread of Lyme disease, which makes it much less fun to throw off your cares and take a walk in the woods or fields. I never wear shorts outdoors any more; my default outdoor attire is lightweight long pants, permeated with Permethrin, tucked into my socks. Not exactly barefoot boy with cheek of tan.

Well, we’re not alone. The CDC just issued a report (see it here) that says diseases carried by ticks, mosquitoes and fleas are spreading throughout the U.S. (Adding a suitably apocalyptic note: The flea-borne disease is plague.)

It lists nine diseases, including our fave trio of Lyme, West Nile and equine encephalitis, and says their incidence has tripled – tripled! – in just 12 years, from 2004 to 2016. It says nine new germs spread by mosquitoes and ticks have been discovered or introduced in that time, and that four out of five public health agencies around the country are not equipped to deal with this rise.

There’s no quick techno or bio-medical fix in the works for all this, which is largely a byproduct of modern life (bugs and parasites move around the world via trade and travel, while climate change brings bugs further north every year).  It’s mostly up to us to limit being bitten.