If we’re going to decarbonize New Hampshire, home heating is a big problem 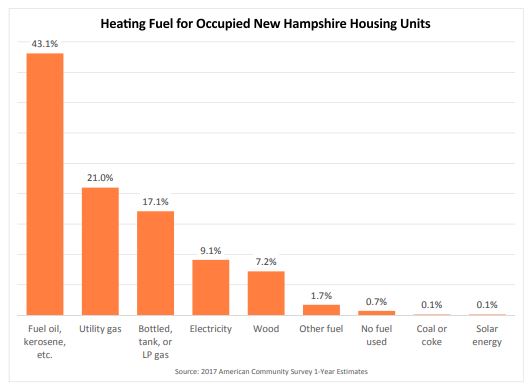 The vast majority of New Hampshire homes still get their heat from fossil fuels says a new state report, reflecting how difficult it will be to decarbonize that part of the state’s economy.

However the report includes a glimmer of hope by showing that New Hampshire’s housing stock isn’t as old as it may seem and is actually newer on average than housing in all neighboring states, a hint that improving energy efficiency may be easier than predicted.

These conclusions are part of a release of New Hampshire Economic Conditions, a monthly report from New Hampshire Employment Security, a department of the state government. Along with updated data about joblessness, the May report includes discussion of some housing information from the 2017 American Community Survey run by the Census Bureau.

The study reflected the continuing dominance of heating oil, and in some cases kerosene, in fueling the furnaces of New Hampshire residences. The Northeast, including New England, is the only part of the country where heating oil is a major fuel; according to the federal Energy Information Administration, 85 percent of heating oil sales in the U.S. go to the Northeast, a region that extends from Pennsylvania to Maine.

The monthly report said that 43 percent of 528,700 occupied homes in New Hampshire used heating oil or kerosene for heat.

Another 21 percent of home use natural gas from pipelines – a figure that would probably be higher if natural gas was available in more of the state – and 17 percent use various types of bottled gas such as propane or LP gas.

In other words, four out of five homes in New Hampshire heat with some form of liquid fossil fuel. Switching homes off fossil fuels to other sources, particularly electricity, is often seen an important step in reducing greenhouse gas emissions because the electric grid can be cleaned up in ways that fossil fuels cannot.

There is some debate about whether electric heat pumps can do the job in northern New England and what effect such a switch would have on the power grid. But environmental activists argue that we have to move away from fossil fuels for heating – in particular from heating oil, which produces about one-third more CO2 than natural gas per unit of energy released, according to the Energy Information Agency – if we hope to contain the effects of climate change.

Another way to reduce the use of polluting heating fuels is to need less of it, by increasing building efficiency. In electricity production this idea is covered by the word “nega-watt,” which combines the words “negative” and “megawatt” and refers to electricity that doesn’t have to be produced because of improvedefficiency.

It is almost always cheaper, often much cheaper, to create a nega-watt of reduced demand than to create a megawatt of new power.

Upgrading the efficiency of existing buildings can be difficult, particularly for older buildings like the housing stock in much of the Northeast. This is where the latest report from New Hampshire Employment Security holds out some hope.

Compared to the other five New England states, New Hampshire has less old housing: 53% of our houses were built before 1959, compared to 55% in Maine, 69% in Vermont and a full 71.5% in Massachusetts. Connecticut and Rhode Island’s housing stock is even more loaded up with old homes.

The data reflect the housing boom that New Hampshire saw in the 1980s through 2000s, when a larger percentage of our housing was built than in any other New England state.

This doesn’t mean New Hampshire’s housing is young compared to the national average, but it is not as old as is sometimes feared.

A number of programs to boost energy efficiency have been developed. They include NHSaves, a cooperative effort by the state’s electric utilities.