‘Narcan is the EpiPen of heroin’ – yes, but not really 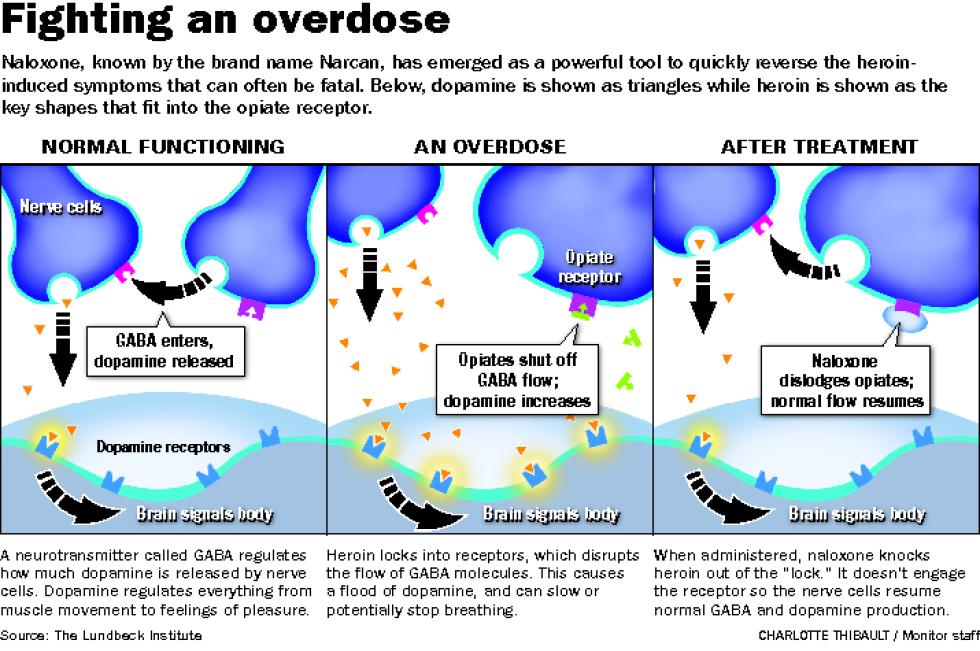 Is Narcan really the EpiPen for heroin addicts?

That’s the analogy you’ll find circulating online, amid all the news about the life-saving antidote to heroin overdose. But as I found out from the state’s chief medical officer, we need to be very careful when dealing with any medical analogy, including this one.

Similarly, the EpiPen started as a specialized medical device, then became available for EMTs and other front-line medical folks, and now can be found even in elementary schools and playgrounds. Narcan started in emergency rooms, then spread to police departments, and now there are efforts to make it available for use by laymen.

“It’s very important that people don’t think this is some kind of cure,” said Dr. Doris Lotz, chief medical officer in the state Department of Health and Human Services. “It’s important for people to understand that’s not the endgame; you still need to seek medical attention.”

Peel back the analogy and you’ll see that Narcan, the trade name of the drug naloxone, does not work anything at all like epinephrine, the drug injected by the EpiPen.

As Lotz explained it, naloxone competes with opioids like heroin for access to receptors in the brain.

Receptors are proteins on the surface of brain neurons. They usually have to be filled with the correct neurotransmitter in order for the brain cell to fire, via what is often called the “lock and key” metaphor. Naloxone works by filling specific receptors in the brain, displacing opioid molecules and keeping them from making your brain send out dangerous signals, such as those that make people stop breathing.

It is, in other words, a competitor to opioids.

Epinephrine, by contrast, is not a competitor to anything. It does not affect the physical underpinnings of anaphylaxis, the over-reaction by a body’s immune system to a trigger such as a bee sting.

Epinephrine (another name for adrenaline) undoes the bad effects of anaphylaxis by doing such things as constricting blood vessels to raise blood pressure, relaxing the muscles around the airways to help you breath, and blocking the immune system’s release of certain chemicals.

“It addresses the cascade of chemical reactions, not the sting itself,” Lotz said.

A big difference is that naloxone wears off fairly quickly, so the amount of Narcan matters as compared with the amount of the opioid. Narcan can revive a heroin overdose victim, but the reaction can start up again if there are still opioid molecules floating around when the naloxone fades away.

“Depending on how much opiate someone has in their system, you may need more (naloxone) because you’re trying to compete with the opioid out there,” she said.

An EpiPen shot, on the other hand, does not have what Lotz called a “volume interaction” – it will stop the allergic reaction for good, in most cases. If this analogy leads you to think that Narcan is similarly long-term, you won’t be prepared for a possible relapse in a half-hour or so as the Narcan wears off.

The analogy can fail in the other direction, too.

Here’s another difference: Naloxone can in some circumstances be used as a preventative for opioid reaction and is even used in conjunction with other drugs to help wean addicts from heroin, but epinephrine is not a preventative for anaphylaxic shock. The analogy can be dangerous if it leads you to inject yourself with an EpiPen, thinking it will be protection during your visit to the local beehive.

And this is exactly the difficulty with analogies: It’s easy to misapply them.

I’ve always thought this is the reason so-called New Age systems go wrong. They take a good analogy, such as saying that human feelings are like vibrations, and treat it like a physical law. Next thing you know you’re throwing away money on The Healing Power of Crystals because crystals harness vibrations so they must harness our feelings, right? Wrong.

This doesn’t mean we shouldn’t use analogies, of course – they are vital to understanding the world. It just means we need to be very, very careful when applying them. The world is usually too complicated for a simple “this is like that” rule to always apply.

“Very few things in our body happen in isolation,” as Lotz noted. “There are all sort of consequences, connections. . . . There needs to be an understanding if you’re going to use them.”