Science Cafe returns Wednesday with fish on the intellectual menu 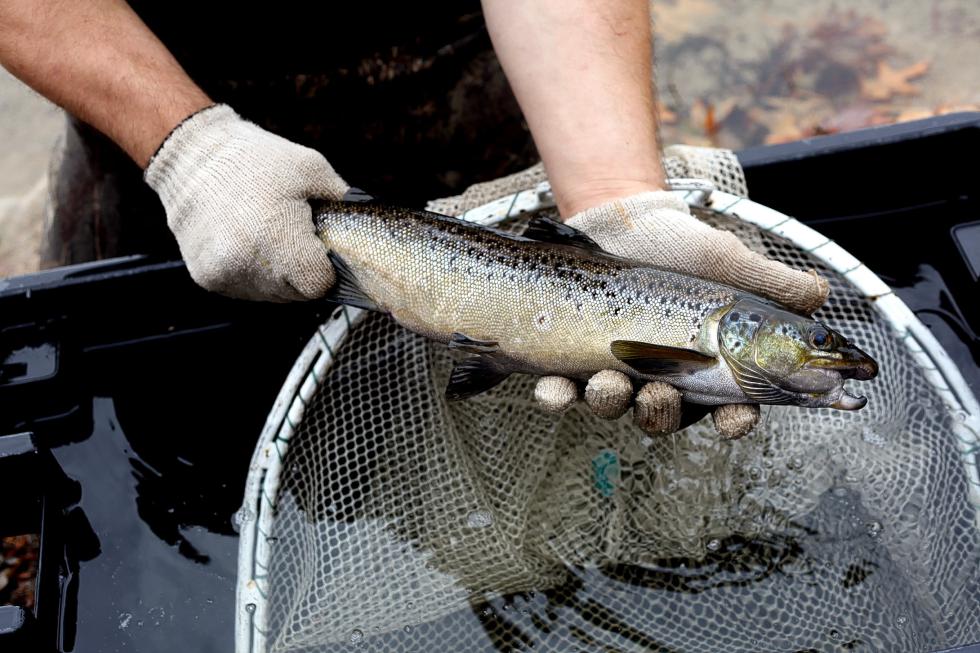 John Viar, a wildlife biologist, measures and weighsthe salmon in Lake Winnipesaukee. Smaller fish will be released back into the pond, while larger ones will be kept until they shed eggs in the next couple of weeks. (IAIN WILSON / Monitor staff)

It says something about fishing in New Hampshire waters – but not something terribly good – that our two highest-profile species are fading away.

In fresh water, it has been many years since the Atlantic salmon was anything but an artificial presence, maintained only by being bred in hatcheries and stocked from trucks. Hopes that we could reverse the situation died last year when a decades-long effort to get them to naturally return to the Merrimack River was shut because it wasn’t working.

Out at sea the dismaying story involves cod, the fish that defined early New England and was the mainstay of commercial fishing until recently. The amount of cod that day boats sailing out of New Hampshire ports are allowed to catch has been cut so low that it’s affecting their ability to fish for other species.

What does this mean for fish, and fishing, in New Hampshire? Is it a sign that we’re soon going to be stuck with nothing but jellyfish and minnows, or is it just part of changes that are bound to occur as humanity and the natural world intersect?

That’s just the sort of question that will be served up on the intellectual menu Wednesday evening, when Science Cafe New Hampshire starts back up in Nashua after our summer hiatus. The informal discussion will feature two marine fisheries specialists and a project leader from the federal fish hatchery in Nashua to answer your piscatorial questions, amid the drink and food of Killarney’s Pub, where we’ve been holding monthly sessions for two years.

As always, it’s free, starting at 6 p.m. and also as always, the discussion will be driven entirely by your questions.

We’ll try not to make this session too much of a bummer – although if we do, there’s always beer as a consultation. But there’s certainly a lot of bad news around the state’s fishing.

Many species, not just cod and salmon, face pollution and overfishing problems, with river-blocking dams a further blow to species that travel between fresh and salt water. But there are other issues at play, with climate change and warming water high on the list.

You’ve probably heard the most about cod, because it affects the fishing industry which is at the heart, if not longer the economic center, of our seacoast.

“Our ground fisheries – flounder, cod, haddock – they’re in a little bit of a turmoil because the cod situation affects a lot of what our fishermen can do. Two years ago, the quota was cut 70 percent. This year it was cut a similar amount,” said Gabriella Bradt, a marine fisheries specialist from New Hampshire Sea Grant, UNH Cooperative Extension.

It’s extremely difficult to catch species of groundfish, those which live not far above the sea floor, without catching other groundfish species because they mingle together. Cod that are accidentally caught when seeking, say, haddock count against the federal quota that is shared by the state’s few ground-fishing boats.

“Their fishing opportunities end once they reach their quota for cod, even if they are fishing for something else,” said Bradt.

As moderator, I’ll be asking Bradt and colleague Erik Chapman about the science of estimating fish populations at sea, which is a contentious issue. Many in the fishing industry believe marine science is underestimating populations, especially of cod.

“Even scientists will tell you there’s a huge amount of uncertainty,” said Chapman. “We’re at the limits of what science can do, in terms of estimating what’s going on in the ocean.”

It’s a whole lot easier to estimate salmon populations in the Merrimack River watershed, because we can count adults as they pass several dams to return here to spawn. Alas, few have done so, despite efforts to re-establish spawning populations in places like the Souhegan and Piscataquog rivers, which is why the U.S. Fish and Wildlife Service is wrapping up a program that started in the 1970s and will concentrate on helping the salmon in Maine rivers.

The future of Nashua’s federal fish hatchery, which was central to this effort, is up in the air as a result.

Michael Bailey, project leader for U.S. Fish and Wildlife Service at the hatchery, will be one of our panelists.

See you there. Bring an open mind and a bit of a thirst.