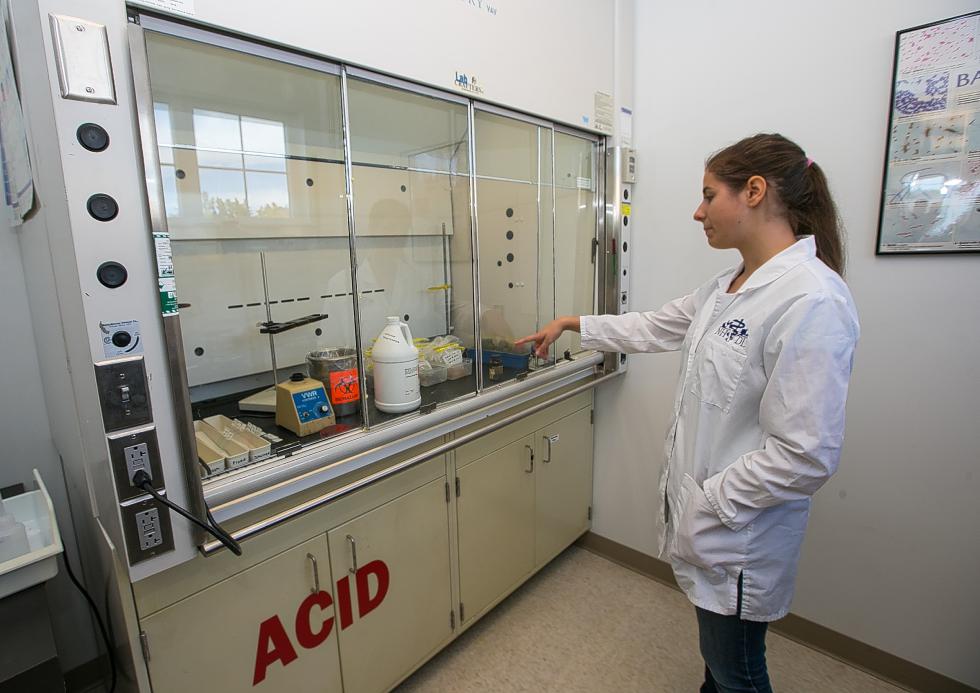 UNH senior Lyndsay Canwell shows the fume hood, which keeps potentially dangerous material from floating out into the room, at the new Veterinary Diagnostic Lab on the campus of UNH Wednesday. Canwell, from Maine, will be graduating next spring with a degree in microboiology and plans to continue her education after that. (GEOFF FORESTER / Monitor staff)

The new Veterinary Diagnostic Laboratory at the University of New Hampshire can analyze everything from a one-ton (NOTE: The weight of this hypothetical moose has been changed; see reader’s comment below) moose to microscopic pathogens, with animals from alpacas and loons to guinea pigs in between. But the creature it’s most likely to deal with is more prosaic: the chicken.

“We’ve seen a lot more as the number of backyard flocks has increased,” said Steve Crawford, the state veterinarian, as he waited for Wednesday’s official unveiling of the $2.5 million facility on the UNH campus, which replaces the lab that has operated for 45 years in Kendall Hall.

The old lab tested some 15,000 chickens annually for salmonella bacteria or signs of typhoid and 6,000 chickens for avian flu. Those numbers seem likely to rise as the growing local food movement encourages more people to try small-scale farming, which often includes getting a few egg-layers.

“Chickens are the gateway drug . . . for having (farm) animals,” joked Dorothy Perkins, an extension field specialist with UNH Cooperative Extension in Boscawen. “First it’s chickens, then it’s goats, then sheep.”

Such hobby farming might not seem connected to a place like the Veterinary Diagnostic Laboratory, which has three pathologists among its seven full-time, four part-time and 15 student employees and handles cases from farms, aquaria and zoos as far away as Texas.

With an emphasis on animal health as it relates to public health, it supports a variety of UNH research work as well as the largest and most cutting-edge of farms, and conducts biopsies of tissue from dogs and cats for private veterinarians. About 40 percent of the lab’s $1.2 million operating budget is covered by fees from such work, said the lab’s managing director, Robert Gibson.

But Lorraine Merrill, commissioner of the New Hampshire Department of Agriculture, which co-runs the lab with UNH, said the switch to small-scale agriculture makes the Veterinary Diagnostic Laboratory even more important.

“Most new animal owners have had no training in animal health,” Merrill said in her remarks at the open house. “They need a lot of help.”

Equipment in the 6,500-square-foot facility alongside the Thompson School of Applied Science includes a sparkling clean room for conducting necropsies – the term for an autopsy on a non-human animal – on large animals like cattle and horses. Necropsies could also be conducted on the occasional moose as part of research into moose die-off or deer as part of keeping an eye out for chronic wasting disease, a variant of “mad cow” diseases that hits deer and elk.

It’s not only bigger than the old necropsy room, so that all 15 students doing grand rounds as part of pre-veterinary or veterinary-technician courses can watch at one time, but more accessible: Large carcasses can be shifted straight from the loading dock, whereas before they had to be hauled to the old necropsy room via a passenger elevator.

“We used to stink up the entire Kendall Hall,” she admitted. “This has much better air handling,” which helps with both smells and biosecurity.

Samples are sent to the lab in a variety of forms, from tubes of urine and vials of fecal matter to milk cultures to swabs from animals’ skin, ears or, as is often the case with horses, the uterus. Owners of valuable mares want to be sure the animal has no infection before going through the expense of breeding it.

Horses are another common subject of the lab: More than 10,000 horses are tested annually for equine infectious anemia.

Samples can undergo a variety of tests, depending on the situation, said Lyndsay Canwell, a senior from Maine who is majoring in microbiology and works at the lab.

“If it has some parasites, we will find them and identify them,” she said. They also can identify whether bacteria in a patient has resistance to any antibiotic.

“That’s especially important where there are multiple infections with resistance to different antibiotics. The practitioner could use an (antibiotic) against one bacteria, but it would leave the others behind,” she said.

The histology section prepares more than 10,000 slides annually, and suspect tissue is sliced and stained and prepared for microscopic or other analysis by pathologists, with a variety of stains and solutions that help differentiate good tissue from bad.

One major area of concern in animal health these days is avian influenza, a debilitating disease that led to tens of millions of chickens being slaughtered on Midwestern farms earlier this year.

It has not been found in New Hampshire but could arrive any time, which is why chickens and some wild birds are regularly tested.

Gibson, the lab director, said that is an area where more improvement is needed. The lab does blood tests for avian flu but does not yet have the equipment or training for a method known as PCR, which greatly amplifies genetic material and makes testing faster and more certain.