Bitcoin developer (he knows Satoshi Nakamoto!) will be in Keene on Friday 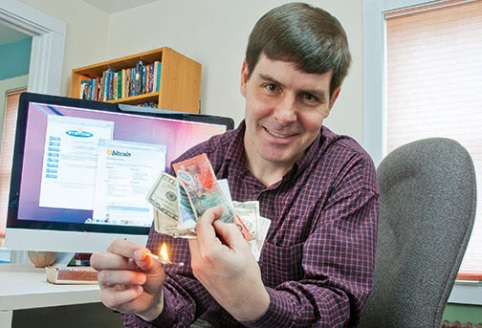 Keenevention is an awkwardly named but intriguing annual event held by the Free State Project in Keene aimed at the activist portion of the libertarian crowd. I don’t count myself among them – too many think “The Fountainhead” is non-fiction – but they bring up some pretty interesting ideas.

The weekend-llong event will take place in and around the Best Western Hotel, with lots of social gatherings plus panel talks and how-two sessions on things like jury nullification, the aggressive parking meter feeders (aka “Robin Hooders”), and how to secede from government.

At 2 p.m. on Friday, however, there’s a bitcoin panel which should have broader appeal.

The session is notable because it will feature Gavin Andresen of Amherst, Mass., a core developer of bitcoin for a number of years who knows Satoshi Nakamoto, the mythical (not necessarily mythological, although you never know) creator of bitcoin. Andresen is a very big name in bitcoin who has raised interesting technical questions, including whether the whole project is going to fall apart because of size limit in its building blocks. Andresen is proposing actions that could create a “fork” in bitcoin’s underlying systems next January – an idea that has a lot of people upset. Technology review had a good article about it in August.

I imagine there will be a lot of high-level geekery in the session, so if that appeals to you, check it out. The session will also feature some folks who are using bitcoin in real-world applications.

Keenevention costs $60, or $25 for a one-day pass – although these are believers in freedom and liberty, so perhaps they won’t object if you sit in for free. Keenevention.info has more information.