Push to resurrect “Amazing Stories”, the iconic science-fiction magazine, gets a TV boost 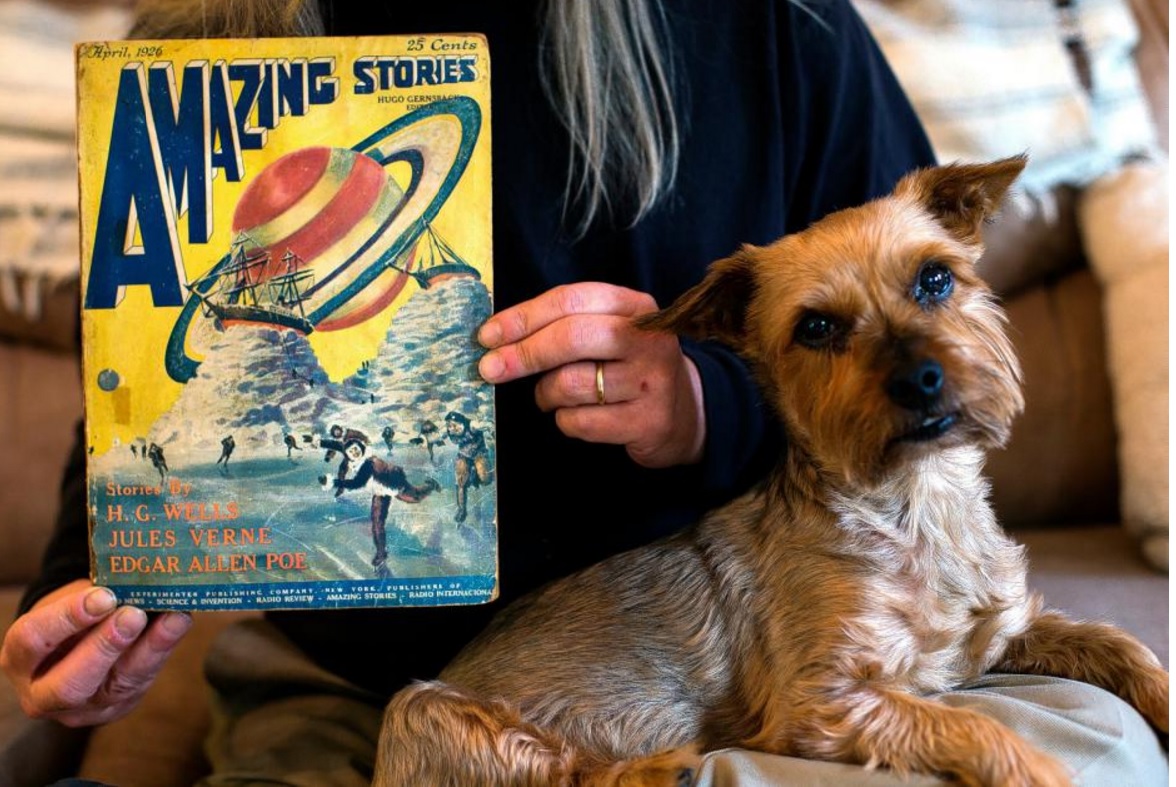 In the process, he hopes writers can scoop up more of the profits.

“This generation has embraced science fiction and fantasy like no generation previously. It is firmly established as part of the mainstream culture. But the author is the one who always gets the short end of the stick,” said Davidson, a New Hampshire resident (he’d rather we not share exactly where he lives). “We continue to dance with this idea that the people who are going to make the most money over original creativity are the secondary or tertiary people, like film production studios . . . not the original creators.”

How does Davidson, whose fiction career consists of some decades-old rejection slips, hope to change this?

Thanks to a bit of serendipity while bored at work, Davidson owns the trademark to Amazing Stories, a name dating back to the very first science fiction magazine, which Hugo Gernsback created in 1926.

The print magazine died in the 1980s and never came back to life despite efforts by several owners, although it is still revered by many fans. Gernsback is so important in the field that his name is on the Hugo Awards, the sci-fi version of the People’s Choice Awards, and Davidson calls Amazing Stories “the Coca-Cola brand of the science fiction industry.”

These days the name is best known to the general public for Spielberg’s anthology show Amazing Stories from 1984 and 1985. It was a weekly anthology that presented hourlong stories with a twist, following the format pioneered by the Twilight Zone two decades earlier.

NBC is in the process of developing a new Amazing Stories, with Bryan Fuller, executive producer for the show Hannibal, in line to produce and write a pilot. It would be an hourlong weekly anthology series built around what Entertainment Weekly calls “fantastic, strange and supernatural stories.” Spielberg will apparently not be involved.

To make this happen, NBC had to license the name from Davidson, likely for its Syfy cable channel. If the show gets the green light, as Hollywood likes to say, Davidson will collect fees (he declined to say how much).

All well and good, but what about Amazing Stories the magazine? Head back to 2008, when Davidson worked a job involving intellectual property.
“Part of my job was to check current filings of trademarks that might impact the company I was working for, which is an extremely boring thing to do,” said Davidson, 57. “To keep myself amused and awake, I would look up trademarks of things that were of interest to me.”
Many of those look-ups were related to science fiction, which had long been his passion. One day, to his astonishment, Davidson saw that Amazing Stories was available.

“I literally could not believe it. I called my wife over and asked her to read the screen out loud, to prove that it was real,” he said.

After a few years of problems, he eventually bought the name for slightly less than $1,000, and used it to upgrade his science fiction blog, called Crotchety Old Fan. Starting in April 2014, he launched an online magazine called Amazing Stories (at AmazingStoriesMag.com), which includes daily posts of fiction, news and reviews of science fiction and fantasy.

The famous name and Davidson’s avowed efforts to preserve an icon – Davidson said he bought the trademark partly so it would “never be at risk of being picked up by somebody for non-science fiction purposes” – has drawn help from famous science fiction old-timers like writer Robert Silverberg as well as newcomers like Tanya Tynjala, whom Davidson called a “Latin American Finn” who both writes and edits Spanish-language editions.

The free publication has tens of thousands of registered readers from around the world, with translation software allowing publication in Spanish, German, sometimes Italian, and English-language posts from Chinese bloggers.

What Amazing Stories doesn’t do, Davidson said, is pay for submissions.

He had initially hoped to fund the magazine through the sale of a paintball business he owned before moving to New Hampshire eight years ago – his wife, Karen, is a native – but that sale died during the Great Recession. Online-only magazines don’t make much, if any, money so Amazing Stories writers and artists have been in the distressingly common position of creating work in return for exposure.

Licensing fees from a TV show might change that, Davidson said.

“My idea is that this will form the backbone of purchasing fiction at professional rates to publish,” he said. “The opportunity to license the name gives me a revenue stream that was inaccessible to most publications.

“I’d like to put a plug in for the  Science Fiction and Fantasy Writers of America. It was that membership, and tapping into that membership, that helped me acquire the Hollywood entertainment attorney who has been doing very good work for me, and making this (TV licensing) possible,” he said.

Davidson has plans that include print versions of the magazine and other revenue streams, including the possibility that a print magazine “become a loss leader” supported by ancillary advertising and merchandise sales.

“The numbers say it’s doable, at a profit,” Davidson said.

As for the TV show, Davidson admits to feeling slightly concerned because he couldn’t negotiate any editorial control, although he says “believe me, I tried.”

“My biggest worry right now is that they’re going to put a show on underneath the name, that may be successful . . . but the science fiction folks are going to look at and say it’s old hat, the science fiction is terrible, the science is terrible. I think a show can be respectful of both the general audience . . . but also of the people who have, quite literally, built this community and this literature up from scratch with a lot of volunteer work and personal investment,” he said.
But he’s optimistic, pointing to the movie Guardians of the Galaxy, which was a hit with both insiders and outsiders.

“It’s possible to make a television show or movie that will satisfy both kinds of audiences,” Davidson said. “I’m hopeful.”