GRANITE GEEK: Science Cafe puts spotlight on growing solar market, and makes a little news of its own 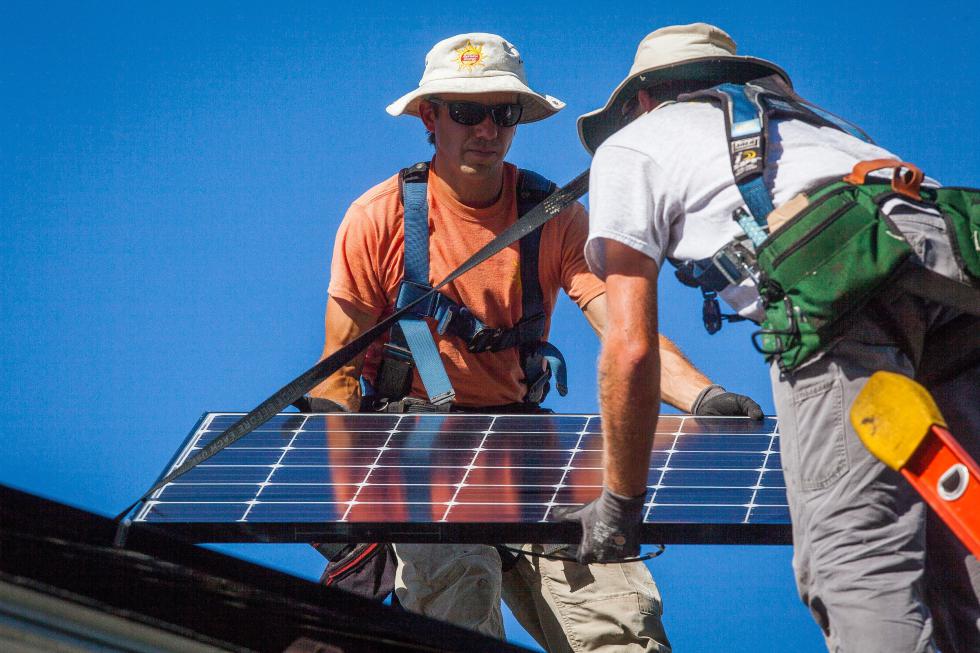 ReVision Energy employees Steve Dzubak (left) and Jared Cobb install a solar panel on the roof of a Concord home on Thursday, Aug. 27, 2015. In total, 25 panels will be installed and will supply the homeowner with more power than he is expected to use. (ELIZABETH FRANTZ / Monitor staff)

It wasn’t so long ago that solar panels were only embraced by off-grid engineering hippies. Boy, have things changed.

“Most consumers that we speak with have a basic understanding at this point, have either seen it or have first-hand knowledge through acquaintances or neighbors,” said Mark Weissflog of KW Management in Nashua, who has been putting up solar array systems since 1998. “The education level of most consumers is light years ahead of what it was 10 or 15 years ago.”

While that’s true, I bet you’ve got some questions about solar power. Enter Science Cafe New Hampshire, where questions and answers – and beer – are the order of the day. Or, rather, night.

The monthly discussion will tackle solar power Wednesday, featuring Weissflog and Daniel Clapp, New Hampshire general manager with ReVision Energy, a New Hampshire-based solar firm. As always, anybody can show up and ask whatever they want about the topic, from the physics of photovoltaics to the future of the American utility – although I suspect “how do I get me some solar power?” will be the main theme of the gathering.

The panels themselves have become more efficient and cheaper, but what’s really improving are the “soft costs,” the speed with which it can be installed, the design and effectiveness of integrating DC photovoltaics with your AC home, the building codes and zoning regulations, and most importantly the financing to tackle the up-front costs.

“Putting up panels is like filling your oil tank for the next 25 years,” said Weissflog. “It saves money in the long run, but there’s a big expense. That’s a problem for many people.”

It’s now possible to lease panels, roughly the way you lease a car, which has spurred so much adoption of solar panels in parts of the country that the power grid is having trouble coping. Community solar projects are also becoming an option.

New Hampshire is behind the solar curve compared to some of our neighbors, largely because we don’t support solar power much. We do have enough of it that we’re bumping up against the total amount allowed under the “net metering” cap, in which utilities pay you for the extra electricity you generate. That’s one of the big issues facing the field right now.

There are also more exciting possibilities to consider.

“One of the biggest opportunities is to integrate your electric car, your Volt or your Leaf, to your battery storage system,” said Weissflog. “That’s where things can really change.”

Speaking of change, Science Cafe New Hampshire is about to see some.

I have moderated the monthly gatherings since they were started 4 ½ years ago by science fans Dan Marcek of Brookline and Sarah Eck of Hopkinton. Their goal from the beginning was to expand science cafes around the state and they’ve been really successful; similar events have been started by others in Manchester, Lebanon and Portsmouth.

Next January, a new one is starting in Concord, and I’ll be moderating it. We’re still working out the details – can we call it “Yet Another Science Cafe New Hampshire?” – but we know it will be fun, a further mestastasizing of this enlightening form of entertainment for grown-ups.

Science Cafe New Hampshrie in Nashua is also transforming and will have news of its own soon.

You can find out more at the website (sciencecafenh.org) or by showing up Wednesday at Killarney’s Irish Pub, 9 Northeastern Blvd., Nashua, starting at 6 p.m.

Extra credit if you glide in on a solar-powered electric hoverboard.

(David Brooks can be reached at 369-3313, dbrooks@cmonitor.com or on Twiter @GraniteGeek.)