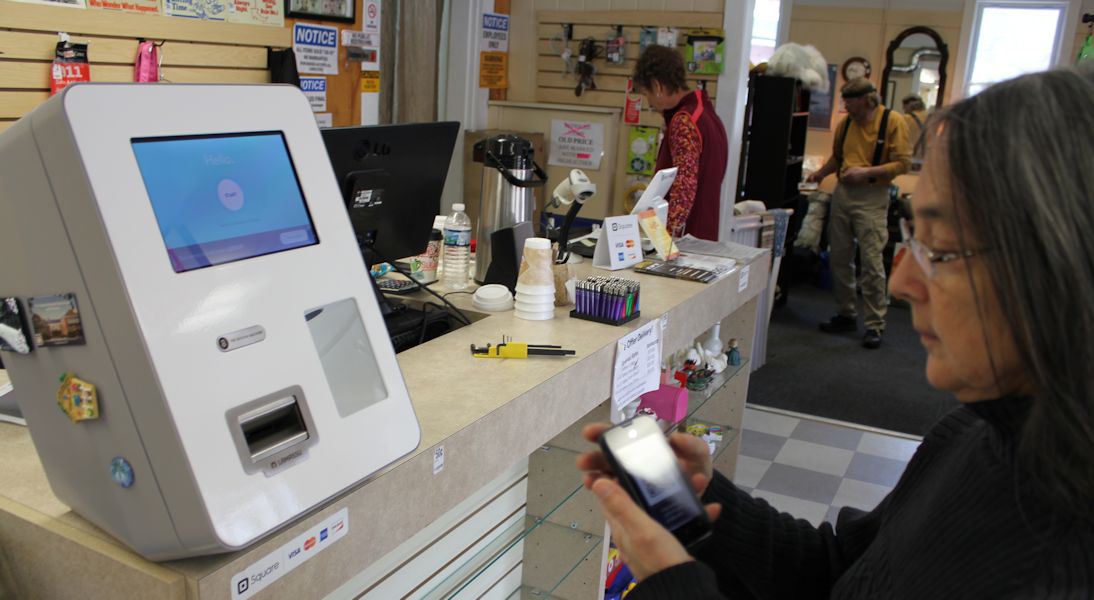 If you’re in the retail business, it can be helpful if your competition disappears . . . all over New England.

“They’ve got people driving in from Boston, from New York. It’s the only place for them to go,” said Ian Freeman, concerning what appears to be the only operating public bitcoin machine in New Hampshire, Massachusetts, Vermont, Maine or even New York.

The device from Manchester-based company Lamassu is in a former thrift store being converted to a locally oriented retail shop called Route 101 Local Goods, at 661 Marlborough St. in Keene, which has long been a hotbed of bitcoin due to its connection with the libertarian Free State Movement.
Last week was the one-year anniversary of the store hosting what Freeman calls a “bitcoin vending machine” rather than “bitcoin ATM,” because it accepts dollars but doesn’t dispense them.

Freeman is an unabashed bitcoin advocate as part of various Free State Project-related advocacy efforts, including his radio call-in show Free Talk Live, that have led to many run-ins with police in recent years. He is a self-described pastor of the Shire Free Church, which is in an ongoing fight with Keene over its attempts to be tax exempt. The church provided the bitcoin machine for the store, he said.

For Freeman, the machine’s anniversary is worth celebrating but is bittersweet, reflecting on bitcoin’s failure to become part of everyday life.

Although bitcoin has been touted as the future of money for several years, the number of retail businesses in New Hampshire that accept it remains very small, barely in three digits.

There was a time when several public bitcoin vending machines and ATMs were operating in the region, including at least one in Manchester, but judging from reports, both online and verbal, the others have either disappeared or been turned off. Even in places where they seem to be a natural, such as Cambridge, Mass.

“I was really surprised about MIT,” admitted Freeman.

Neal Conner, customer service manager for Lamassu, said the company has 138 machines currently operating around the world, with customers in “over 40 countries.” He said the firm that owned the Boston-area machines, including one in South Station that received considerable publicity because it was one of the first anywhere, had “pivoted” their business plan away from high-traffic locations to more targeted business “nationwide via cards in convenience stores.”

“We are waiting for the right person to come along and make a splash,” he said, noting that in some locations, including New York City, “they are doing very well.”

“It comes down to promotion and location,” he said.

On a large scale, bitcoin is also doing well. The digital currency, which is not issued by any government or overseen by any bank or regulator but depends on mathematically complex software for its legitimacy, is rising in value and becoming more accepted in the business world. Its underlying technology, called blockchain, is showing great promise in legal and contractual areas outside finance.

So what’s the problem locally?

Freeman said he thinks bitcoin still needs the creation of a “killer app” to draw the general public’s attention. Unless you are attracted to bitcoin’s anti-government philosophy or want to buy and hold the currency as a speculative venture, hoping its price will soar, the value of using bitcoin is not obvious to many people.

Freeman notes that a couple of websites are offering discounts on such things as Starbucks coffee and Amazon purchases if Bitcoin is used, perhaps because using bitcoin can reduce transaction costs for retailers compared to credit cards and traditional banks.

The shortage of bitcoin machines can be partly traced to technical problems with a Bitcoin machine company called Skyhook and regulatory clampdowns, including one in New York state that shut down bitcoin machines in Buffalo and Syracuse and peripherally closed one in Burlington, Vt., said Freeman.
Cost is also an issue.

The Lamassu machine costs about $6,500 new, Freeman said. The Keene machine has a 5 percent commission, of which 1 percent goes to the store, 1 percent to buy bitcoin and 1 percent for technical and server costs, Freeman wrote during a Facebook discussion about the issue. The machine grossed $10,000 in business in October, which means only about $200 was available to cover the cost of the machine – although that’s not as bad as it sounds, because Freeman bought it used.

Because of the way bitcoin works, it’s actually possible for anybody to go online and see the transactions that the Keene machine has processed via the website blockchain.info, as long as you know its “address” – which is 1FCNJLtDd1RovtFtQmuhA1xyF5cCoNYx2H. Recent transactions are as large as five bitcoins, currently work about $1,650, and as small as four one-hundredths of a bitcoin, or about $13.