Dreaming of a drone? You may have to register it 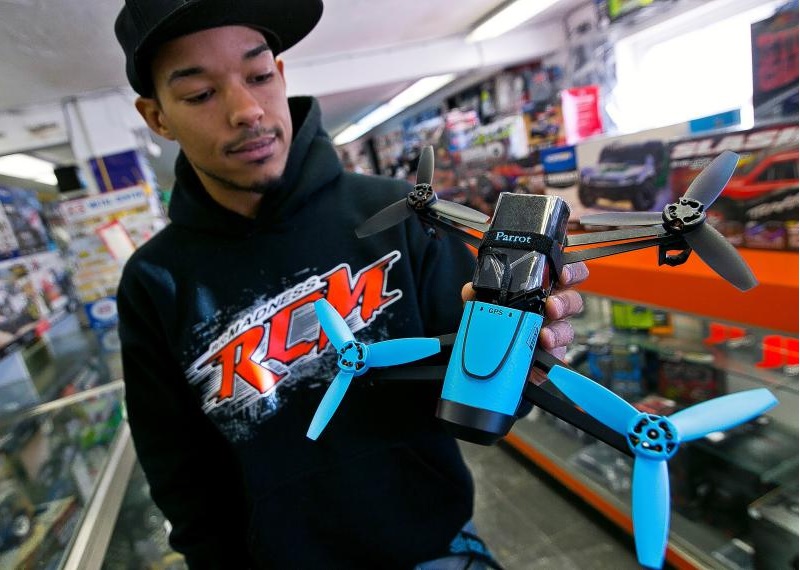 Route 106 RacePark Hobby store manager Kevin McDaniel holds one of the drones he sells. This drone can be operated from a cell phone and has video capabilitiy and sells for around $500. (GEOFF FORESTER / Monitor staff)

(This story ran in Wednesday’s Monitor, but I couldn’t post it yesterday because of GraniteGeek’s web hosting problems)

If you hope to unwrap a new drone for Christmas, be ready to register with the government – an idea that isn’t necessarily popular, even if it’s designed to keep drones from endangering others.

“I think the FAA trying to require registration is way out there. If they’re going to expect it to be grandfathered in, it’s not going to happen,” said Dan Weed of Weed Family Automotive in Concord, who is knowledgeable of the area’s drone community through his long prominence with radio-controlled aircraft. Among other things, Weed flies the blimp inside the Verizon Wireless Arena at Manchester Monarchs games.

Kevin McDaniel, store manager for Route 106 RacePark Hobby Store in Suncook, which sells a number of drones, was also dubious about the idea put forward Monday by a federal task force.

“If you’re using it for a commercial use, that I understand. Other than that, I think it’s completely unnecessary,” he said. “Telling people, once you’ve bought this $40 quad copter, you’re going to have to give your information to the government. That’s getting a little too personal.”

The result, he predicted, is that it “probably will put a hindrance on sales.”

The proposed rules were put forward Monday by a 25-member task force that included people associated with airlines, tech firms, drone manufacturers and the government. They came in response to growing pressure on the Federal Aviation Administration to loosen their rules on drones.

The proposal can be read online at faa.gov/uas/publications/media/RTFARCFinalReport_11-21-15.pdf

The FAA still must decide whether to implement the suggestions, but an agreement seems likely. The FAA promised to have some sort of rules in effect by mid-December.

Drones of all sizes and capabilities are likely to be a popular Christmas gift this year, with predictions that as many as 400,000 new drones will hit the nation’s skies after Dec. 25.