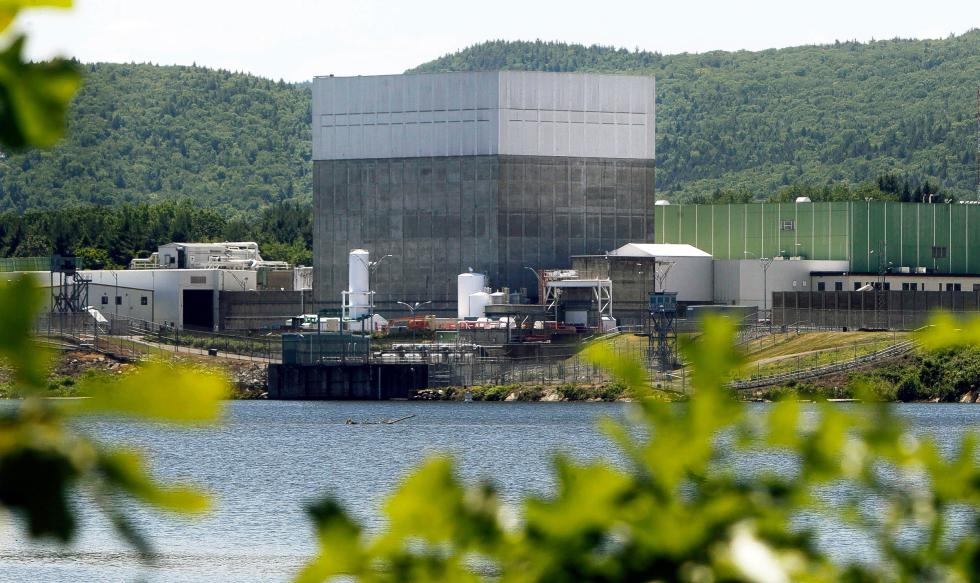 FILE - In this June 19, 2013, file photo, the Vermont Yankee Nuclear Power Station sits along the banks of the Connecticut River in Vernon, Vt. The plant was closed at the end of 2014. Closed nuclear reactors are dipping into funds set aside for their eventual dismantling to build waste storage on-site, raising questions about whether there will be enough money when the time comes. (AP Photo/Toby Talbot, File)

New England has more than enough capacity to meet electricity demands this winter, but the organization that oversees the regional grid continues to warn that the region needs more reliable supplies of natural gas to avoid future problems.

ISO New England, which operates the electricity grid in New England, said in its annual project for winter supplies that it has identified 4,220 megawatts of gas-fired power generation “at risk of not getting sufficient fuel on any given day.” That is more than three times the output of Seabrook Station Nuclear Power Plant.

Even so, and even with the closure of power plants such as Vermont Yankee, ISO New England’s winter report indicates that no power shortage is predicted this winter.

The organization predicts peak demand during “extreme weather” would be slightly less than 22,000 megawatts throughout the six-state region, while the region has 29,932 megawatts of generation capacity available, plus about 600 megawatts of electricity that could be imported from Canada if needed.

Losing all 4,220 megawatts of gas-fired generation identified as being “at risk” would, in theory, still leave more than 4,000 megawatts of excess capacity.

This may be less of an cushion than it seems, however.

Almost half of the electricity capacity in the region comes from gas-fired power plants. While during most of the year there is more than enough natural gas available, in winter, much of the natural gas flowing into New England through pipelines is contracted for heating. As a result, cold spells can leave too little gas for power production.

The need for power is actually greatest in summer: The all-time peak usage for New England – 28,130 megawatts – happened on a hot August day in 2006, producing demand that was about 20 percent more than it has ever been in winter. But there is no competition for natural gas in summer, so gas-fired plants can run at full bore.

The supply constraint and effect it has on electricity prices in New England is the main argument used by supporters of proposed natural-gas pipelines to bring gas from mid-Atlantic shale fields into New England, including the proposed Kinder-Morgan pipeline.

The constraint is also indirectly used by supporters of Northern Pass, who say bringing hydropower down from Quebec would decrease the region’s susceptibility to gas supplies.

In case of a cold weather shortage, natural gas-fired plants that don’t have contracted supplies from pipelines must try to find fuel on the very expensive spot market; use liquified natural gas stored on site or bought in by train or truck; switch to burning oil if they are a “dual fuel” plant; or shut down until the shortage is over.

Enough gas-fired plants shut down for a time during the winter of 2013-14 that, when combined with a couple of other problems, the electricity grid came close to having rolling blackouts. That led ISO New England to create a Winter Reliability Program to tackle some of these issues. The program includes paying plants that can burn oil or liquefied natural gas to stock up on supplies in advance, so that they can step in quickly if a pipeline shortage occurs.

Such steps, plus non-traditional moves held down sharp short-term price increases and avoided any power crunch last winter, despite the long stretch of cold and snow.

Business groups disagree sharply, saying that pipelines are the only way to reduce the region’s high electricity costs by bringing in natural gas, which is very cheap right now.

ISO New England has not taken a stand on any specific pipeline proposal, but its concerns about what it calls “constraints on the region’s natural gas pipelines” is seen as supporting the idea of more pipeline construction.

“Winter has become a challenging time for New England grid operations,” said Vamsi Chadalavada, executive vice president and chief operating officer of ISO New England in a prepared statement. “Especially during the coldest weeks of the year, the natural gas infrastructure in New England is inadequate to meet the demand for gas for both heating and power generation.”

One notable point in the ISO report is that the projected peak demand is 1,660 megawatts less than would be required if not for energy efficiency measures.