Leather power transmission belts – how is that still a business? 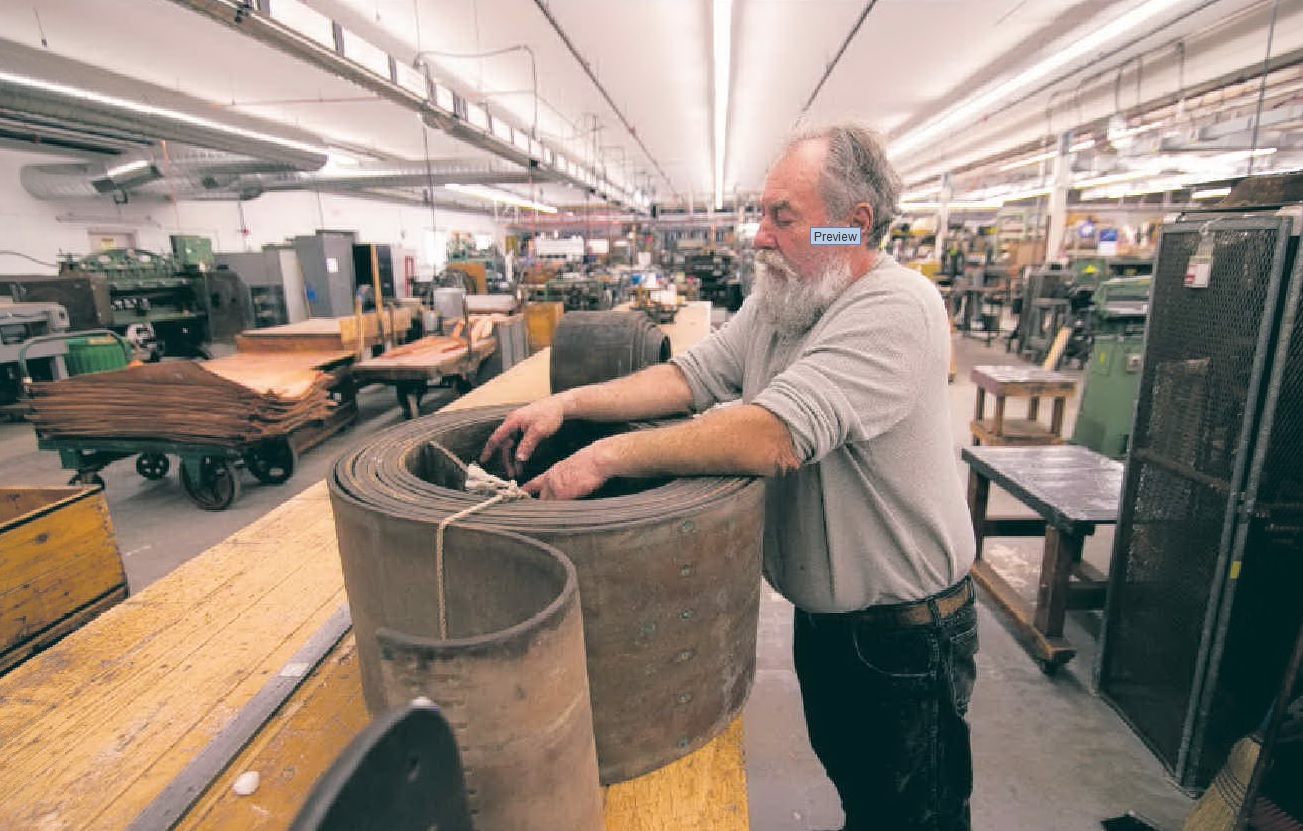 Robert Boutwell of Page Belting looks over a belt that the company is going to replicate to connect with the water wheel at the Common Man restaurant at the Hooksett rest stop. Boutwell says employees are cross-trained to do any work in the building. (GEOFF FORESTER / Monitor staff)

In 1975, a bright young man named Joseph Arsenault patented a lug strap for a Concord company that made industrial products out of leather, especially power transmission belts for machinery – a fading technology even then in the face of direct-drive motors and synthetic materials.

Patent No. 4,019,542 is notable partly because it’s the oldest Concord-related record you can find in the U.S. Patent Office’s searchable database without plunging into the esoteric hard copy system. But it’s also notable because, much to my astonishment, the company that employed him – Page Belting Co. – is still making industrial products out of leather, including power belts.

It’s a classic case of how seemingly outmoded technologies have useful lives that continue far longer than we realize.

“In 1992, when I was hired, people were surprised. People thought they were closed,” said Mark Coen, who came to Page Belting as a vice president of sales and who bought the company in 2000.

Page Belting is a shadow of its booming self of a century ago, not surprising because most of its staple products were bypassed by technology, including a leather bumper that was installed on tens of thousands of textile looms around the world. Such bumpers are nylon mesh now.

But Coen said about half of production is still for industrial purposes. About 20 percent of Page Belting’s business comes from making or repairing leather drive belts, some for historical verisimilitude, but some, including one so large it drives a roller coaster, because there’s no good alternative. That includes power belts made from leather links, held together like a chain.

“We get all sorts of funky stuff. At least two hydroelectric dams, built in the ’20s and ’30s, use large leather links,” he said.

A third of the business involves making gaskets and seals out of leather treated in different ways for different properties.

A major gasket customer is Coleman Lanterns, which uses specially formed leather gaskets even though leather is far more expensive – one hide costs from $9 to $14 per square foot, depending on how it has been tanned – because leather retains shape in a way that plastics and synthetics don’t.

“They told me, ‘We’ve been dying to find a cheaper alternative, but we can’t,’ ” Coen said. “They asked if I would help them, but I said, ‘No thanks.’ ”
“Our niche is supplying unusual industrial leather parts where the market’s not big enough for anybody in China to think of, using small production runs,” Coen said.

Old-time Concord residents know of Page Belting Co. from more than a century in the big-brick buildings at Horseshoe Pond, which are now the Horseshoe Pond Place senior citizens’ housing.

Founded in 1868 by the Page brothers and incorporated in 1872, it was one of the bastions of Concord industry well past World War II, turning trainloads of hides from tanneries throughout New England into everything from stagecoach bridles used by Buffalo Bill to “millions and millions” of power belts that ran Singer sewing machines.

Page Belting was known for high-quality engineer transmission belting, such as the huge drive belts – up to 2-feet wide, scores of feet long – you may have seen in operation at the Lowell National Historical Park, connecting textile looms to overhead drive shafts driven by water power. Even long after electricity became available, as the technology of electric motors was developed, power transmission belts were indispensable to the industrial world.

“Belts were to industry what cabling for computers is now,” said Coen, who is also an at-large city councilor in Concord. “They were vital.”
But that was then and this is now. By all rights, Page Belting should have died decades ago, or transformed itself into a firm that makes leather consumer goods like gentlemen’s belts and tool holders. That sort of product is about half its current business, much sold under its venerable J.R. Hill & Co. brand, but industrial products continue.

The manufacturing staff today is just six full-timers – from Billy Cate, who has worked for Page Belting for 43 years, to “newcomer” Billy Webster, who has been there for nine years – and a couple of part-timers. The equipment is a steampunk lovers’ dream; think gears and levels, even machines made of wood, rather than software and touch screens. With the exception of the occasional purchase like a $15,000 computerized stitching machine, most of it dates back a half-century or more and is operated just as it was then, slowly and carefully, one piece at a time.

A big drawback is that this equipment isn’t made anymore; often its manufacturer doesn’t even exist. There are no operating manuals or spare parts or experienced repair staff. But that’s less of a problem than it might be.

“The beauty of so much of this equipment is how simple and efficient it is. If something goes wrong, you don’t need an I.T. guy; you need a clever mechanic,” Coen said. He uses Davis Machines, on Hall Street in Concord.

Sales are slightly over $1 million a year and have started growing, Coen said. This is the best year Page Belting has seen in “a dozen years, I’d say.”

But it faces a long-term problem: Fading infrastructure, both physical and personal.

Coen said most of America’s leather industry collapsed around the turn of the millennium and went to China. Even though many of these products are not in Page Belting sales territory, such as shoes, their loss killed off the leather-related support systems. Like tanneries.

“There used to be, oh, 20 tanneries in New England. Now there’s one that I know of, maybe two,” Coen said. Page Belting buys its hides through brokers who purchase American steers and sends them to Mexico for processing.

“There was a time when, if you needed to hire a leather stitcher, you put out a sign and people came knocking,” he said. Difficulty in finding people who know how to precisely stitch leather is why Page bought that computerized stitching machine.
For most of what Page Belting does, however, it’s not worth the cost to automate the work because the production runs just aren’t big enough.
“These are hand-crafted, really,” he said.

Coen admits it’s not certain how long industrial leather products will continue to be a viable business model. After all, Nanocomp, the first New Hampshire company to thrive by making material out of billionth-of-a-meter carbon nanotubes, was created not too far away, so it’s not unreasonable to expect that there might soon be no need for cow hides that are treated with tallow or fish oil (Page Belting keeps to organic treatments), heated to 175 degrees and, stretched on hand-turned clamps, then cut and clued or attached like links on a chain.

Until that time, Coen said, the firm will continue making things that companies need, even if the technology seems old-fashioned. It’s the least they can do for Joseph Arsenault, who was head of research and development.

“He was a very clever guy – his family’s still in Concord,” Coen said.

(David Brooks can be reached at 369-3313, dbrooks@cmonitor.com, or on Twitter
@GraniteGeek.)