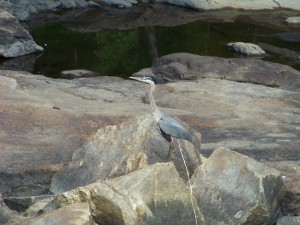 This week I wrote a story about animals and birds causing power outages by interfering with equipment and power lines. Near the end I mentioned a fact that I learned while researching it: Bird poop, which because of bird anatomy is usually a mix of urine and feces, conducts electricity, and when it comes out in long stringy strands that run from one bare wire to another, it can cause a short circuit.

Which led David Still, an engineer with Eversource at its Manchester headquarters, to send the above photo, taken on the Merrimack River in Manchester. It is evidence of the stringiness, if not an actual short circuit. so I wasn’t making it up.

Still isn’t a bird feces fanatic, by the way: “I think I took about 5 or 6 different pictures of that heron over maybe a minute and a half to accidentally get that shot,” he wrote. That, my friends, is known as citizen journalism.