UNH rocket examines ‘upwelling’ that (among other things) snags satellites 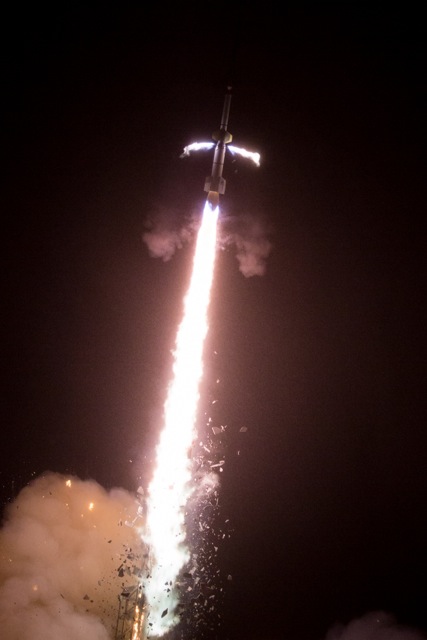 A team of scientists led by Marc Lessard of the University of New Hampshire Space Science Center launched an instrument-laden, four-stage sounding rocket from Norway’s Andøya Space Center about 280 miles above Earth to study how particles move in a region near the North Pole where Earth’s magnetic field is directly connected to the solar wind. The launch occurred Sunday, Dec. 13, at 2:34 a.m. EST.

Funded by the National Aeronautics and Space Administration (NASA), the second iteration of the Rocket Experiment for Neutral Upwelling, or RENU 2, was designed to measure the complex, underlying physics behind the northern lights and heating of the very high altitude thermosphere – a process known as “upwelling” that contributes to the phenomena of “satellite drag.”

The thermosphere begins some 56 miles above Earth and the process of upwelling, which involves neutral atoms that carry no electrical charge and are denser than charged particles, has been known to exist since the earliest days of the space program when observers noted increased drag on Earth-orbiting satellites during periods of increased solar activity. The drag intensifies when the dense neutral atoms create “speed bumps” that slow satellites down and can eventually make them fall back into Earth’s atmosphere.

At the time, the effect was largely attributed to large-scale motion in the ionosphere, which begins at 37 miles above Earth, heating the thermosphere from below. However, more recent observations have shown that neutral thermospheric upwelling can also occur on much smaller scales and can be more localized in what’s known as the cusp region – two “funnels” of magnetic field lines that allow a small amount of solar wind to reach the top of the atmosphere and produce the auroral glow.

Lessard and colleagues launched the first RENU rocket in 2010 from the Norwegian launch site. The RENU 2 instrument payload was designed to take an array of additional measurements. The mission is attempting to test, measure, and quantify “electron precipitation” that brings energetic particles down from high above the Earth and delivers energy into the upper atmosphere via Earth’s magnetic field lines.

The new data acquired during the flight will provide information essential for the advancement of understanding the process. The launch location in the far northern polar region was chosen so that the experiment could take place in total darkness at noontime.

Although the effect of satellite drag can negatively impact a spacecraft’s orbit over time, which is a concern for certain low-orbit, strategic satellites, Lessard stresses this was not the primary motivation for the experiment.

“From NASA’s point of view this is a mission of pure science, we’re trying to understand the processes behind neutral upwelling and how it is associated with visible aurora phenomena,” says Lessard, associate professor at the UNH Institute for the Study of Earth, Oceans, and Space (EOS) and department of physics.

“This is the first time anyone has tried to measure these neutral particle enhancements at these altitudes and with this combination of instruments,” Lessard says. He adds that it appears the team was successful in getting the rocket to transit a region of neutral density enhancement but because so much data is gathered during rocket launches (unlike satellites, vast amounts of data can be transmitted quickly back to Earth) it could take months to analyze the results.

The team of investigators also includes colleagues from the Aerospace Corporation, Dartmouth College, Cornell University, and other collaborators, including those at the University of Oslo, the Kjell Henriksen Observatory (KHO, operated by the University Center of Svalbard), the EISCAT Svalbard Radar, and SuperDARN radar

An array of ground-based instrumentation located at KHO in the northernmost part of Norway complemented the rocket measurements. The data will be used to quantify neutral density enhancement, or regions of higher neutral atom density, and will also be used by theorists on the team to run mathematical models to gain insight into the heating and precipitation processes. Notes Lessard, “the instrumentation and science support provided from our colleagues at KHO has been invaluable.”