Got a decade or three? Let’s bring the American chestnut tree back to our forests 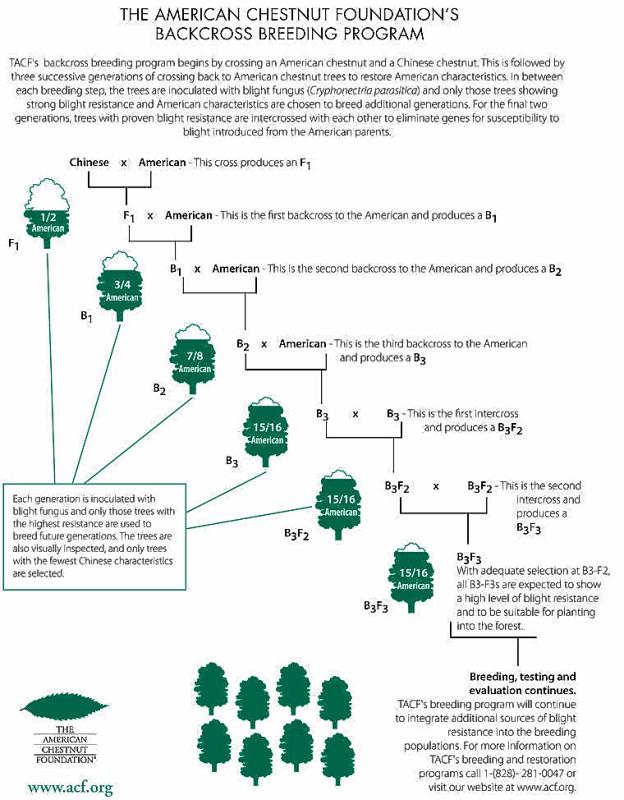 Patience is a virtue – unless you’re a forester, in which case it’s a necessity. Especially when bringing a species back from the dead.

“It’s such a fast-growing species,” said Will Guinn, regional forester for the state Division of Forests and Lands, talking about the 500 American chestnut trees he helped plant this year at Vincent State Forest on the Weare-Deering line. “It can start producing nuts as early as five years after planting.”

Five years is fast?!? Holy moly – I moan and groan if my computer takes five seconds to do something. I guess forestry is not in my future.

Guinn was instructing me on the reality of long-range thinking during a discussion about the American chestnut tree, whose saga is one of the saddest in Eastern forests but also one of the most hopeful. Sad because the tall, beautiful species became virtually extinct in one human generation; hopeful because an extensive crossbreeding program might return it.

The planting of nuts in a section of clear-cut at Vincent State Forest is part of the restoration effort. It faces some interesting obstacles, including other wildlife success by New Hampshire biologists.

“The nuts are very desirable food for wildlife. They have higher protein and higher fat content than any other nut around here, including beechnuts, acorns,” Guinn said. “It’s ironic that predation from reintroduced species – turkey, bear – are one of the biggest hurdles.”

It looks like the only hope is to plant nuts inside protective tubes, and even then deer browse them heavily when the tree pokes out the top.

Why all the effort? The chestnut is worth it.

The American chestnut made up as much as 30 percent of the hardwood trees throughout the eastern seaboard until the late 19th century, and its straight trunk and beautiful wood were valued for lumber, while its prodigious output of nuts was valued by wildlife, not to mention holiday roasting by an open fire.

Then in the span of five decades, a fungus carried to the U.S. in imported Japanese chestnut trees wiped out virtually every living American chestnut. Roughly 4 billion trees were killed by the chestnut blight through the 1920s.

You can still find a few stumps in the woods, sending up shoots until they get big enough to die from the chestnut blight, and very occasionally there’s a mature tree so isolated that the fungus hasn’t found it, but for all practical purposes the species has been gone for three human generations.

Worse, the chestnut’s saga isn’t unique. The American elm was wiped out by a different invasive fungus, and our ash trees are all but doomed by the unstoppable emerald ash borer, an insect that carries a tree-killing pathogen.

Other invasive insects are posing other threats, including the woolly adelgid that is killing our hemlocks and the voracious but thankfully slow-moving Asian long-horned beetle, which threatens almost everything.

Add in white pine blister rust and red pine scale, two native diseases that show signs of worsening here as the climate changes, and it sometimes seems that our forests will eventually consist of nothing but oaks and a few tourist-luring sugar maples that the state protects, invasive bittersweet vines and Japanese knotweed having killed the rest.

That’s why the decades-long effort to restore the American chestnut is important. It’s not just trying to resurrect forests’ past, but to insure their future amid continuing threats.

The nonprofit American Chestnut Foundation has been crossbreeding Chinese chestnut trees, which are blight resistant but smaller and less productive, with nuts from the few remaining American chestnuts. The goal is to combine the resistance of the former with the appearance and production of the latter.

Nuts from these Virginia trees are being planted across the country, including the 500 nuts at Vincent State Forest and a larger planting just done on UNH-owned land by the New Hampshire Agricultural Experiment Station.

A more interesting variation, however, is the development of local strains by crossbreeding with nuts found in a specific area. The New Hampshire/Vermont chapter of the ACF has several breeding farms on state and private land, where the crossbreeding is done only with American chestnut remnants found in the same state.

The process is slow and tedious. When a chestnut tree is found (my wife spotted one in New Boston this summer that hadn’t been recorded), the flowers are hand pollinated with chestnut pollen and then each is individually covered with a bag, so that non-chestnut pollen can’t contaminate the process. At the end of the growing season, workers return and harvest each nut so it can be planted and prepared for another generation of crossbreeding.

This project aims to grow not just a lot of crossbred American chestnut trees, but a lot of localized strains throughout the country that are more attuned to the local soil nutrients, climate, predators and competition.

This is where the going gets slow. Each generation has to grow roughly five years to produce nuts, but they are also inoculated with the fungus and observed over years, so the most disease-resistant trees are cross-pollinated and planted and then waiting for the next generation.

The goal is for sixth-generation B3F3 trees grown in New Hampshire to be made available to landowners across the state, which will take at least two more generational crossbreeding. So maybe that will happen by 2025, although it will probably take longer.

That’s only the start of it, really, because it takes years before you can tell what effect the wild fungus is having on a tree.

We’ll be watching those B3F3 trees for years, as they get eaten by deer and die from dry spells and attacked by native insects, trying to judge how many are surviving encounters with the fungus. If we’re lucky, by 2035 we might have an idea whether a local fungus-resistant strain of American chestnut is ready to return to our woods, but it might take a lot longer.

“That’s one of the frustrations of being a forester,” admitted Guinn. “Sometimes you don’t ever get to see the final product of your efforts. . . . But it’s still worth trying.”

As I said, patience is required. Lots and lots of patience.