New Hampshire is home to a million-dollar prize in mathematics (wait – mathematics?!?) 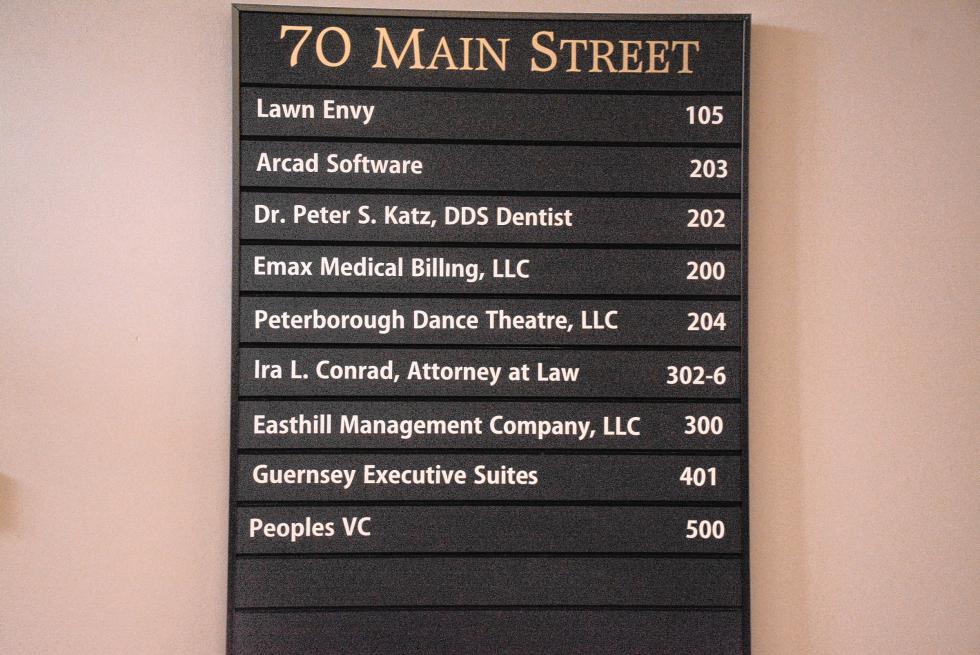 There's no indication from the lobby listing that 70 Main St. in Peterborough now holds the administrative offices of the world's richest mathematics prize and other work by Clay Mathematics Institute. (Mondadnock Ledger-Transcript/Benjamin Rosen)

New Hampshire has more connections to modern mathematics research than you might think – Google the names John Kemeny, Ken Appel and Yitang “Tom” Zhang for a start – but here’s a link that is particularly surprising: Since last summer, the richest math prize in the world, worth a cool million bucks, has been based in Peterborough.

Yes, Peterborough, as in the MacDowell Colony and the inspiration for the play Our Town. Not a very math-y place, it would seem.

Yet last year the Clay Mathematics Institute, creator of the septet of million-dollar Millennium Prize Problems, set up shop in a converted mill building at 70 Main St.

So if you think you’ve proved the Riemann hypothesis or can show that P really does equal NP despite what everybody assumes, that’s the place to go.

Actually, that’s not entirely true. Geniuses should really contact the mathematics portion of the institute, based at Oxford University in the United Kingdom. The New Hampshire office only handles administration and thus keeps a low profile, which is why neither the local chamber of commerce nor the town clerk’s office knew it existed.

Still, you have to wonder, why Peterborough?

For the most modern of reasons: traffic.

That’s Landon T. Clay, a Harvard graduate and former CEO of Eaton Vance in Boston, one of the oldest investment firms in the country, and the man who founded the institute named for him.

Clay, who is nearing 90 years old, lives quietly in Peterborough – so quietly that I couldn’t reach him for comment. CMI’s administrative offices moved here last summer from Rhode Island and share office space with East Hill Management, another Clay firm.

Clay, whose name shows up on any list of richest Massachusetts businessmen, has long invested in science-based ventures and donated to scientific projects. In 1999, he founded Clay Mathematics Institute, designed to support research mathematics through fellowships, grants, conferences and the Millennium Prize Problems, which offer a million dollars for anybody who solves one of seven famous math problems.

“They are interesting problems that people have thought about for a long time,” said Arthur Jaffe, a Harvard mathematical physicist who was the first president of CMI and helped establish the Millennium Prize.

None of these programs is known to laymen and none has any immediate application. Just understanding the questions can be difficult. The Hodge conjecture, for example, says that certain de Rham cohomology classes are sums of Poincaré duals of the homology classes of subvarieties, and none of the other problems are much more down to earth.

The concept of the Millennium Prize Project is to make these valuable but obscure problems more visible via the one thing that gets all of our attention: money.

“It was basically my idea,” Jaffe said. “I gave Mr. Clay a list of possible ways to proceed. (The prize) was really a project to advertise the institute. It seemed to be a very good way to draw the attention of young people to mathematics.”

It certainly drew attention in 2003, when a Russian mathematician named Grigori Perelman solved one of the problems, the Poincaré conjecture, and then refused the million dollars for not-entirely-clear reasons. Partly Perelman thought others deserved equal credit, partly he thought prizes are bad for science and partly he seems to be somebody who doesn’t interact well with the world.

Alas, this ended up reinforcing the stereotype that people who are good at math are weird, which I’m convinced is the unspoken thinking behind all of the people who humblebrag about their inability to balance their checkbook. Hopefully, the next prize will be won by somebody more celebrity-like.

In the meantime, Clay Mathematics Institute administrative offices in Peterborourgh will continue its work supporting the highest level of mathematics and the folks who work on the “queen of sciences,” including a number who have gone on to win the Fields Medal, often called the Nobel Prize of mathematics.

“We have somewhere between a lucky and great record, sponsoring winners of the Fields Medal,” James said.

Probably not just lucky, but certainly between quiet stuff like conferences and noisy stuff like big prizes, this New Hampshire institute is making a difference.

Any Thornton Wilder admirers our there? The play Our Equation is just begging to be written.