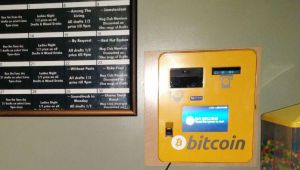 A bitcoin vending machine (not an ATM) has been set up at Murphy’s Taproom in Manchester, reports Free Keene. A year or two ago I would have thought we were beyond being surprised by such announcements, since bitcoin machines were the hot new thing, but this makes just two public bitcoin machines in the state, and not many more – if any – in the rest of northern New England.

As I reported recently, most public bitcoin machines that were announced with great fanfare a few years ago have shut down because they weren’t the hosts any money. Whether this reflects a slow takeup of bitcoin by the general public (probably) or the fact that a digital currency doesn’t really need ATM-ish devices (maybe) or flaws in the operation of the machines themselves (maybe) isn’t entirely clear.

Speaking of bitcoin, a New Hampshire House panel on Thursday rejected proposals to allow people to pay their taxes with the digital currency. And in Vermont, a very interesting report was issued about using blockchain, the technology underlying bitcoin, to cut costs in state record keeping.

As I type this, the next Science Cafe Concord on Feb. 2 is scheduled to discuss all this and more in a “Bitcoin and beyond” session – but due partly to the havoc that the presidential primary has played with everybody’s schedule, I haven’t announced it formally because I’m still trying to pin down panelists. Stay tuned.