Why not a “fact box” of risks and successes for drugs, like nutrition factboxes on food? 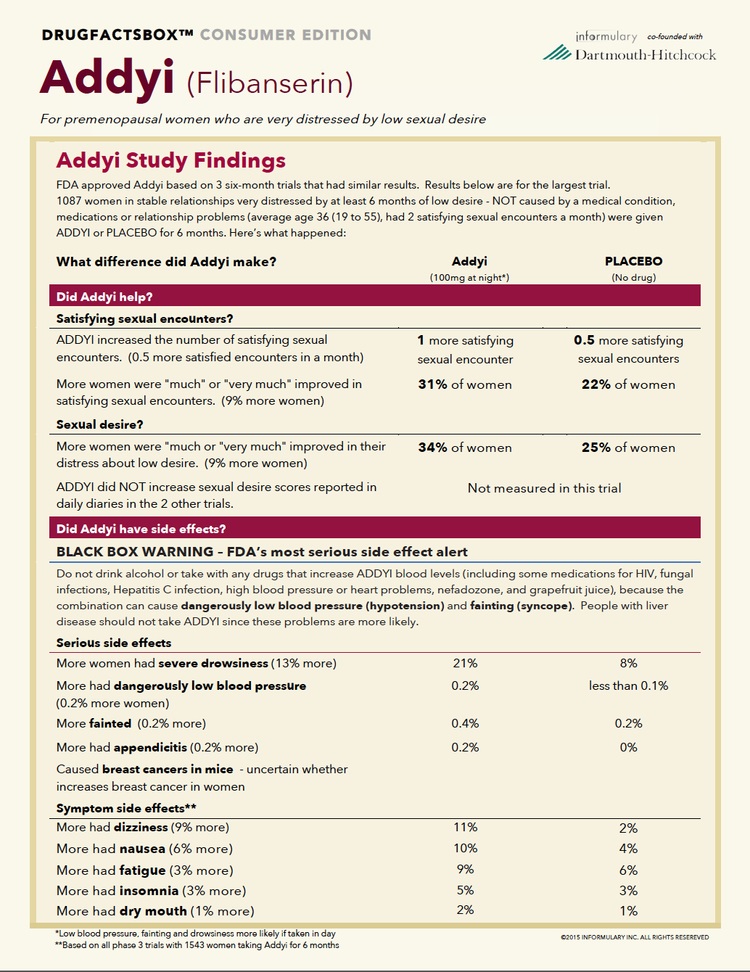 Ideas to help Americans get healthier don’t usually spring from sugary breakfast cereals. But there are always exceptions, and a new company formed by a pair of Dartmouth professors is one.

“We were trying to figure out how to do this and the answer came at breakfast,” said Dr. Steven Woloshin, describing the long gestation period behind the company called Informulary. “We thought: If you can do this for Cocoa Krispies, why can’t you do it for Lipitor?”

He and Dr. Lisa Schwartz have done just that, after years of twists and turns. They’ve taken those lists of Nutrition Facts required on most processed foods and created a version for hundreds of prescription drugs, gathering and summarizing information from peer-reviewed studies, industry analysis and research. What they call DrugFactsBox includes not just possible side effects but plain language descriptions of the benefits and usefulness of the drug, as well as a very quick description of what studies have led to that conclusion so you can decide how much weight to give them.

Yes, there’s a DrugFactsBox for the anti-cholesterol drug Lipitor.

The goal, they say, is to give patients a way to find better and more accessible information, as well as more context than is available through those mind-numbing printouts handed out with prescriptions, and more accurate and objective than is conveyed in drug-company advertising or available from sources dependent on drug-company advertising, such as popular online site WebMD.
“People are depending on information that is not quite true, not quite false,” is how Michael Tupanjanin, CEO of Informulary, put it in a recent presentation at the Monitor.

Informulary – “information” combined with “formulary,” a term for official lists of drugs – is based in Hanover, taking advantage of the nearby medical school for staff expertise. Tupanjanin said the company has about 15 full-time employees, who spend their time distilling public information.

The business model for the private, for-profit company is to sell objective drug-related information to individuals and companies to help them manage costs and improve outcomes, thus avoiding potential conflicts from drug-company advertising as well as the erratic nature of grants.

Informulary has launched the beta version of its consumer website, where people can subscribe to get access to factboxes; companies can buy access as an employee health benefit, which the Monitor has done. Informulary also consults with businesses on ways to control health care costs, such as finding equivalent but less-expensive drugs or non-drug approaches to employee health conditions.

The factbox idea has been long in the making; Schwartz and Woloshin first approached the FDA with the concept back in 2002. In 2009, an FDA advisory committee on risk communication suggested that the Food and Drug Administration require a drug factbox, and the idea was part of the Affordable Care Act in 2011.

But no requirement has come down from the agency, so the pair used grants from the Robert Wood Johnson Foundation to get started three years ago. Now, with a “few million” in seed funding from the foundation, Dartmouth-Hitchcock Medical Center and some private investors, Informulary has been launched.

As befits two professors of medicine at the Dartmouth Institute for Health Policy and Clinical Practice, they’ve done studies against control groups to determine whether the factbox format actually does help people better understand drug risks and benefits, including a study published in the Annals of Internal Medicine. The study shows that the format works, and they have found anecdotally that it’s helpful not only for patients.

“When we did grand rounds, the doctors would come up afterward and say, ‘I want that information!’ ” said Schwartz, who like Woloshin practiced as an internist in the Veterans Administration facility in White River Junction, Vt. “It’s available in journals, but they’re not very accessible. You might need to go inter-library loans. . . . Doctors don’t always have time for that.”

This story first appeared in the Concord Monitor.