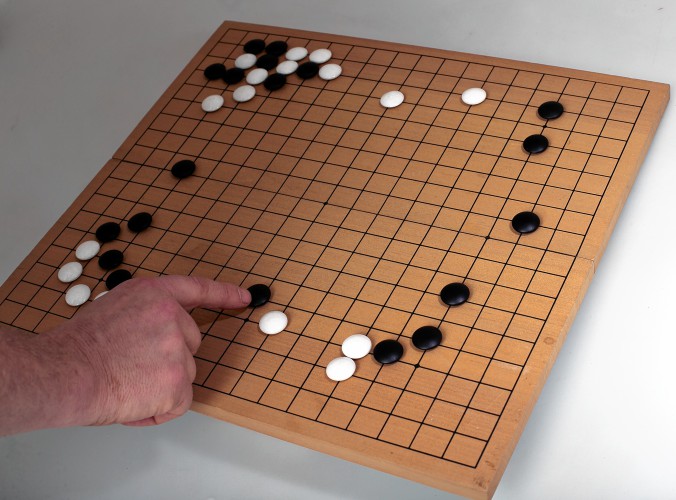 Watchers were shocked by the imagination demonstrated by the computer program AlphaGo when it played this move as black in a game against against the world's best Go player last month. (GEOFF FORESTER / Monitor staff)

(This is my column in the Concord Monitor today): When a computer beat one of the world’s best players at the ancient Asian board game known as Go last month, a lot of people around the world were excited, but a surprising number were dismayed.

Count me among the latter.

I play Go poorly, struggling against commercial software damped down to “advanced beginner” mode, but I still thought that this beautiful, thousand-year-old game requires something uniquely human.

Go is simplicity itself – two players alternate putting black and white stones on a 19-by-19 board while trying to surround the most territory – yet the game is deeper, if not harder, than chess. Go-playing programs have always been much worse than chess-playing programs, which I found comforting. Computers and software might win on Jeopardy and take all of our jobs and humble chess grandmasters, but we carbon-based life forms can always fall back on Go!

As you may have heard, Lee Sedol of South Korea, perhaps the world’s greatest Go player, was crushed last month by Google’s AlphaGo program, 4-1, to the surprise of pretty much everybody. One notable move by AlphaGo – No. 37 in the second game (shown in the picture above) – was so shockingly original that Sedol had to leave the room for 15 minutes to recuperate, even though he was playing against the clock.

In other words, we’re doomed? No way, says Peter Gousinos of Nashua.

“The human brain (uses) 25 watts, and there’s thousands of times more energy going into the software. Looking at it that way, you can say the human’s still more efficient at solving the problem, even if the computer is better at it,” Gousinos said. “No one would be upset at comparing themselves to a car and saying that a car can go faster, would they?”

I asked Gousinos’s opinion not because he’s an optimist but because he’s a programmer and a much better Go player than I. His ranking is about 5 kyu compared with my roughly 12 kyu (lower is better), and he has run a public Go club meeting twice a month in a Nashua coffee shop. For historical reasons, it’s called the Milford Go Club even though it’s nowhere near Milford; you can find it on Facebook.

“As a programmer-type person and a Go player, I appreciated both sides,” he said. “I thought it was something that was still many years off, especially because I had been at computer Go tournaments in the ’80s . . . when they were terrible. Computer Go has gone from being a joke to being a super-amazing piece of software.”

More important than the accomplishment is the way it happened. AlphaGo reached its brilliance via “deep learning,” in which software connections between layers of simulated neurons were strengthened through examples and experience as it played or studied millions of games. That’s almost exactly how our brains work: The connections between our physical neurons change as we learn and live, which gives us memory and personality and many of the properties we regard as essentially human.

With deep learning doing something similar, AlphaGo’s success implies that computers will get much better at many tasks, and will do it very quickly. Suddenly, goofy science fiction ideas like “the singularity,” in which artificial intelligence passes us by, don’t sound so goofy.

People like Stephen Hawking and Elon Musk have even expressed concern that deep learning and its ilk might pose real threats to humanity. We’re not talking feeble “carbon-based life form” jokes here but statements like Hawking’s, “It could spell the end of the human race.”

It’s hard to consider this subject seriously – jokes about Skynet from the Terminator movies are almost unavoidable – but I do sometimes worry that artificial intelligence and robotics are entering a transition point. Their improvement (if that’s the right word) is becoming exponential, leaving life forms that improve at a linear rate far behind.

Admittedly, that’s a lot of highfalutin philosophizing to pull out of one success at one board game. So hopefully I’m just being a grumpy Gus.

Gousinos has a suggestion for me. The American Go Association is holding its annual meeting in Boston the first week of August, drawing hundreds of players of all levels. (For more information, go to gocongress.org.)

“Come to the Go Congress in Boston. I’m sure there will be some really good discussions about it,” he said.

Hmmm . . . I wonder if they have an “advanced beginner” division?