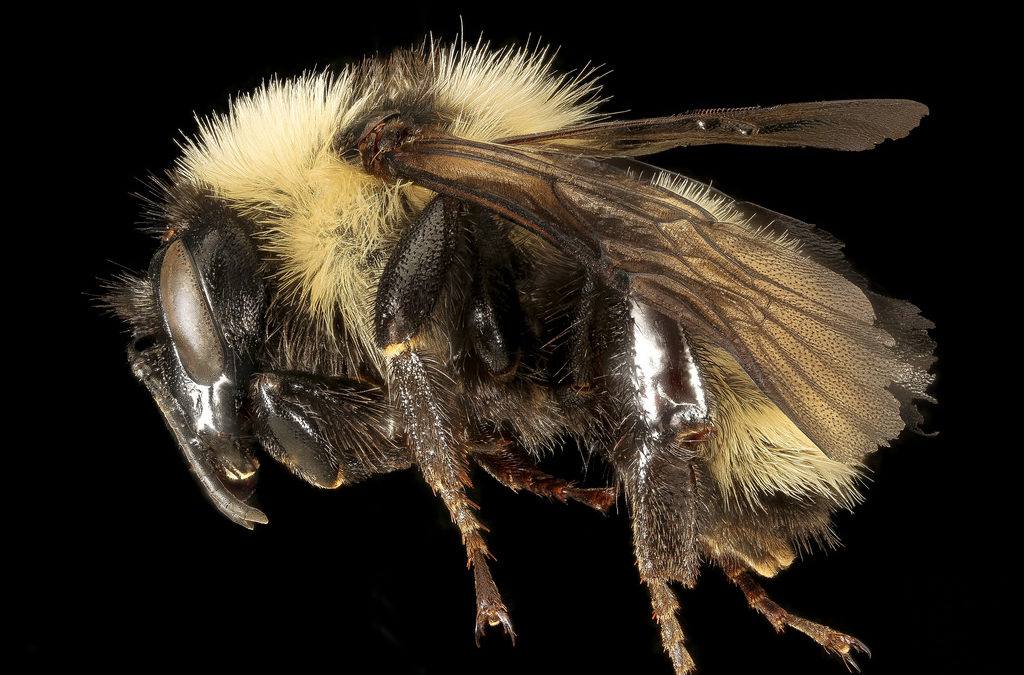 Scientists found one specimen of the golden northern bumble bee (Bombus fervidus) in the WMNF. This bumblebee is declining in the Northeast and is categorized as vulnerable on the International Union for Conservation of Nature’s Red List. Credit: Sam Droege/USGS

By Lori Wright, UNH: The White Mountain National Forest is home to nearly 140 species of native bees, including two species of native bumble bees that are in decline in the Northeast, according to researchers with the NH Agricultural Experiment Station who recently completed the first assessment of the state’s native bee population in the national forest.

Sandra Rehan, assistant professor of biological sciences at the University of New Hampshire, and Erika Tucker, USDA research fellow, have identified a broad diversity of species of wild bees in the national forest, including 10 new bee records for the state and three new records for New England. The research is part of the experiment station-funded research project “Sustainable Solutions to Problems Affecting Bee Health.”

The assessment of native pollinators in the White Mountain National Forest was made following the 2015 UNH Bee BioBlitz. The Bee BioBlitz seeks to document wild bees in the state and determine habitat requirements for conservation efforts.

Researchers were particularly interested in the abundance of four species of bumble bees that are listed for New Hampshire. “Bumble bees are in decline and species are at risk of extinction. Bees are important pollinators and the loss of species and populations is of great concern for sustainable agriculture, functional ecosystems, and indicate a larger problem in the environment,” said Rehan, who oversees the UNH Bee Lab.

In the national forest, scientists found a relatively high abundance of the yellow-banded bumble bee (Bombus terricola), a species listed by U.S. Fish and Wildlife as a species of greatest conservation need. They also found one specimen of the golden northern bumble bee (Bombus fervidus). Both of these bumble bees are declining in population in the Northeast and are categorized as vulnerable on the International Union for Conservation of Nature’s Red List.

“Bee declines are not only a global and national problem, but very much a reality across New England and here in New Hampshire. This study provides critical information on the habitat and status of species of greatest conservation need. Few biodiversity studies of this kind exist yet are essential for documenting species habitat requirements to preserve remaining pollinator populations,” Rehan said.

Bees are important pollinators of food crops and natural ecosystems. The value of pollination to agriculture is estimated at more than $200 billion a year worldwide. The abundance of and diversity of pollinators are declining in many agricultural landscapes across the United States. Given thisimportance, widespread declines in pollinator diversity have led to concern about a global pollinator crisis. The National Research Council has called forregional, national, and international monitoring programs to allow tracking the status and trends of pollinators.

However, there is little information on wild bees, their habitat requirements and status. The Rehan lab now has three years of repeated surveys to determine the turnover in bee communities across land use and climate gradients in New Hampshire. The aim of the research is to establish the diversity and status of bees in the state and to provide essential information on the requirements of these species to provide conservation recommendations.

Previously, Rehan and her colleagues completed the first assessment of the state’s native bee population, providing wildlife experts with the first comprehensive list of the Granite State’s more than 100 native bees that includes nearly 20 species that had not been documented in the state before now.

This research is presented in the article “High Elevation Refugia for Bombus terricola Conservation and Wild Bees of the White Mountain National Forest” in the Journal of Insect Science. This material is based upon work supported by the NH Agricultural Experiment Station, through joint funding of the National Institute of Food and Agriculture, U.S. Department of Agriculture, under award number 1004515, and the state of New Hampshire. This study also was made possible through permitting and support of the National Forest Service, NH Fish and Wildlife, and the Appalachian Mountain Club.