Corpse flowers bloomed all over, not just in N.H., last year – and that’s a puzzle 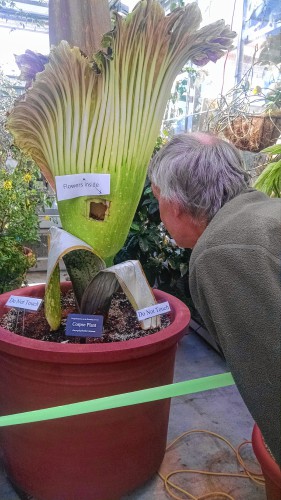 Dartmouth College cut a window into the corpse flower's huge leaf so you could observe the flowers inside.

I was one of the people lucky enough to see the blooming corpse flower at Dartmouth College last September, although I showed up a little to late to get a good whiff of its pungent aroma (sort of like dead people mixed with dirty socks).

As the BBC reports, this bloom was part of a mysterious outbreak: “The corpse flower takes ten years to build up enough energy to bloom, but mysteriously, dozens of them bloomed within weeks of each other in 2016.” As the article notes, this may reflect a lack of genetic diversity in the plants that exist in museums and greenhouses around the developed world, because the corpse flower, like any plant which produces a huge, energy-intensive bloom, tends to coordinate blooms to maximize the chance of pollination by insects.

Here’s the story; it’s quite interesting.