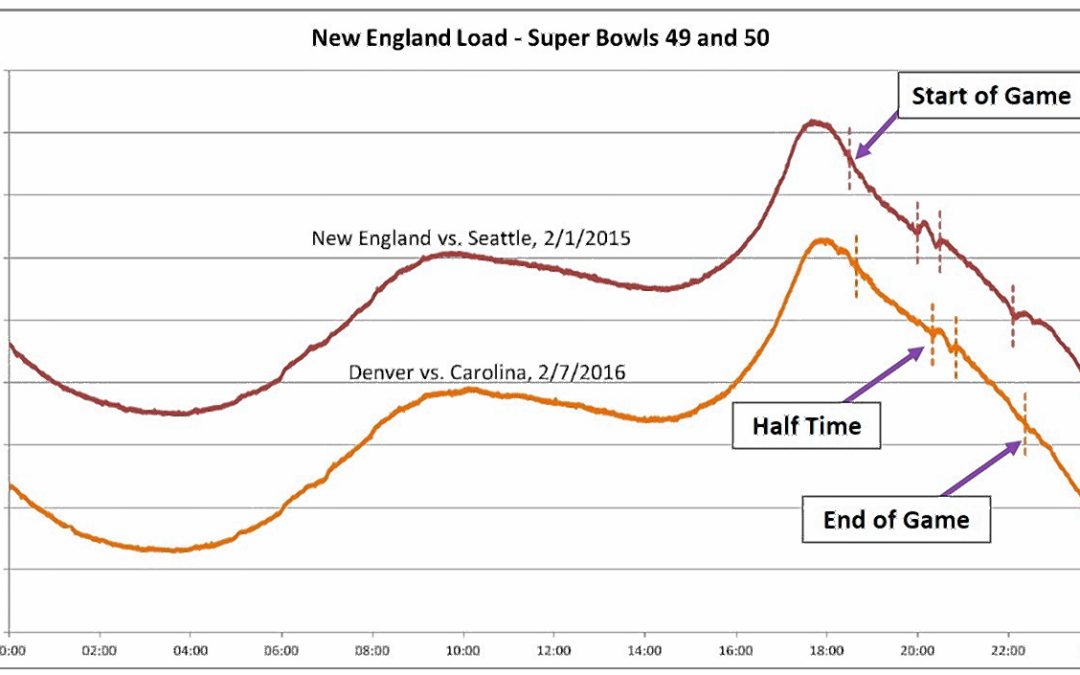 This chart doesn't cover this year's electricity use,

It may be an urban legend that sewer systems get overwhelmed during Super Bowl commercial breaks when everybody rushes to the bathroom, but you can definitely see football mania on New England’s power grid.

“The Super Bowl load curve shows an uptick in demand that coincides with halftime, during commercials, and at the end of the game. These spikes are unique to the Super Bowl and happen because people likely are taking actions that increase electricity use, such as using the oven or microwave, opening up refrigerators, across the six states at virtually the same time,” is how ISO-New England, the organization that oversees electricity transmission in the region, put it in a recent analysis.

“When the Patriots play, these spikes and dips are even more pronounced, as more casual football fans find themselves watching the game,” the analysis continued.

Daily electricity usage at this time of year peaks around 6 p.m., after people arrive home from work, and then declines as industry ramps down for the evening.

In 2015, during the last Patriots trip to the Super Bowl, about 18,100 megawatts were being consumed throughout New England shortly before 6 p.m. By kickoff that usage had fallen to about 17,600 MW and usage continued declining to about 15,200 MW at the end of the game.

As halftime started, however, the decline suddenly reversed itself, rising by about 100 MW. While that isn’t much in the grand scheme of things – it’s an increase of only about half of one percent – it does represent the equivalent of a couple thousand homes suddenly turning on all their lights.

A slightly smaller bump also happened after the game ended.

As for bathroom usage, water and sewer usage does see spikes during the Super Bowl and other major national events, but not to the point that any city system has been overwhelmed.

“Rumors of the havoc wreaked by widespread simultaneous toilet flushing after popular broadcast events have been spread for decades, dating as far back as the Amos ‘n’ Andy radio program of the 1930s. All such rumors are overblown,” says Snopes.com, a well-respected fact-checking website.