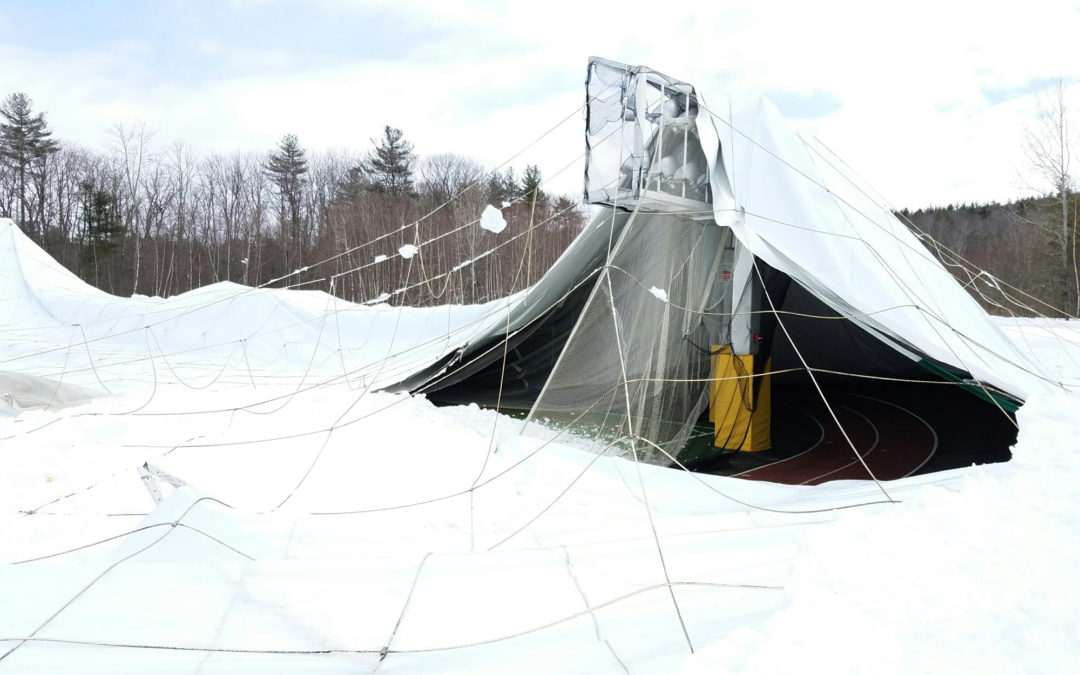 Photo by Don Himsel, Nashua Telegraph: A crew was removing snow at the Hampshire Dome in Milford when it ripped and eventually collapsed March 15.

NOTE FROM DAVID: The Concord Monitor was supposed to run this story of mine today, but it was held because there wasn’t room in print. So you’re special: You get an advance read! Please lord it over your lowly non-newsletter-reading friends.

Two of New Hampshire’s inflatable athletic complexes are recovering from damage caused by last week’s snowstorm, even as a national engineering group has tweaked its standards for how these pressurized domes should deal with snow.

The Hampshire Dome in Milford collapsed March 15 after a tear was opened by snow sliding off the top, while The Bubble at Franklin Pierce University had to be closed after sliding snow damaged exit doors, causing them to leak air. Both had bubbles made of PVC-coasted polyester frabic, and were held up by internal air pressure from fans.

Nobody was hurt in either incident and The Bubble has remained upright, although it is not in use until repairs are completed. The owners of the Hampshire Dome expect to put up a new structure.

Highly publicized accidents like this – The Bubble collapsed twice previously, in 2013 and 2005, due to storms – don’t seem to be putting a damper on the use of bubbles to cover New Hampshire athletic fields, however. Work continues on a new one, called the Granite Dome, in Tilton.

The reason, as you might expect, is money. Covering soccer fields or tennis courts with a “clear-span” building – one without roof-supporting columns that would interfere with athletics – isn’t easy, and an inflatable building can cut the construction cost by 90 percent.

“The larger they get, the cost per square foot comes down. For something like this (The Bubble at FPU), it’s in the neighborhood of $15 to $20 per square foot. Whereas for a conventional warehouse, it’s probably about $150 per square foot,” said Paul Sabo, senior project manager for Air Structures American in Rye Brook, N.Y., which built the 72,000-square-foot facility, officially called the Grimshaw-Gudewicz Activity Center.

The recurrent problems at Franklin Pierce University’s facility are “just one of those things.”

Air Structures, which touts itself as a pioneer in the field of “air-supported structures” with installations dating back to 1963, has customers in Siberia, Newfoundland and a number of states bordering Canada, so it’s not unusual for domes to have to deal with snow.

A subgroup of the American Society of Civil Engineers called the Tension Membrane Committee which sets guidelines for costruction standards of air-supported domes. It recently tweaked the angle of the curved roof at which snow is assumed to slide off such structures, an important factor when designing them for northern climates. The new guidelines emphasize that domes should be able to get rid of snowload by melting it via radiated heat, rather than mechanical means such as shaking the fabric from inside or by putting a “snow rope” over the bubble and sliding it down to disrupt the snow.

“You shouldn’t design a building to require manual snow removal. That’s always an option but it shouldn’t be required,” said Tom Soehngen, vice-president of engineering for Arizon Building Systems in St. Louis, Mo., which manufactures such structures, and a member of the ASCE committee. “The current (guidelines) that we in industry are trying to phase out included a manual snow-removal method – and the industry is trying to get rid of that.”

Soehngen said the charges were not made in response to any particular problems but are part of ongoing improvements to guidelines regularly done by standards body such as ASCE.

The changes may eventually become part of New Hampshire building codes, but even so would not be retroactive.

Sabo, of Air Structures American, said the company tells its clients to have a system preparing for snowstorms, including raising the air pressure inside the building to stiff the membrane, and raising the temperature to speed up melting.

“Above 15 feet (above the ground) the temperature goes up a half degree every 10 feet. It can be 80 degrees at the top,” he said. “Heat rises, remember.”

Another common use of inflated domes is to protect large satellite dishes and other antennas from the elements. Military contractor BAE Systems has at least two of them operating in New Hampshire.

Not all domes are held up by air pressure. Another category of tensile membrane structures are known as frame-supported rather than air-supported. They use relatively light-weight metal or composite frames to hold up the fabric, making them less vulnerable to collapse from depressurization.