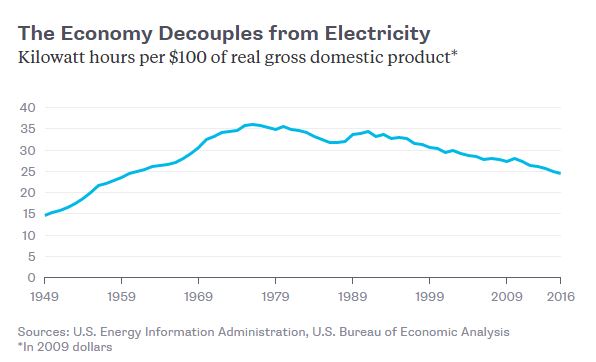 One of the most interesting and important things that has happened in the economy of New Hampshire, New England the U.S. (and much of the developed world) is that we no longer need to make more electricity in order to make more money. In pompous terms, power generation has been decoupled from economic growth, as the attached chart shows.

I suspect this information will be part of the discussion about Northern Pass which kicked up a notch Thursday with the start of the months-long, trial-like hearings by the Site Evaluation Committee, a state board that has to agree with the design and location of this transmission project, which has been debated for seven years. The situation is complicated because of the precarious financial state of nuclear- and coal-fired power plants, many of whom are scheduled to close or likely to close in coming years – meaning that even as usage plateaus, the need for new sources of generation may not.

There’s another complciation: Cutting climate-change emissions will require shifting almost everything to electric power, which is more efficient and provides the only reasonable route to using renewable energy. (Except maybe for biofuels.) So at some point electricity usage had better start climbing again if we have any hope of not roasting the planet.

And speaking of shifting to electricity, I have an interesting (hopefully) article coming in a couple weeks reflecting on two decades of progress, or non-progress, for electric cars in New Hamshire, which was prompted by my discovery in a footlocker of this 1994 article: 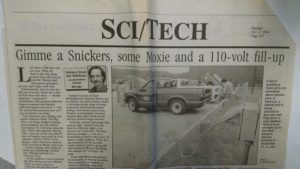