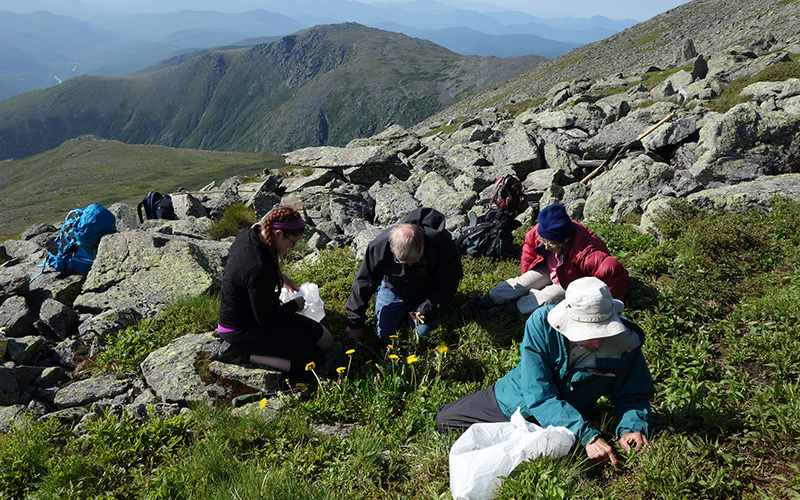 Photo by Allison Bell: Volunteers uproot dandelions in the alpine zone of the Presidential Range.

“Golden-flowered dandelions are a cheerfully disguised menace. With the ability to displace native plants, they represent a new threat to the natural communities on New England’s highest peaks and in alpine zones all over the world. It was generally assumed the harsh environmental conditions in the Presidential Range would prevent their spread into wild alpine areas, but the 2014 sighting demonstrated dandelions can thrive in a remote, pristine habitat.”

That’s from this piece on the Appalachian Mountain Club blog about dandelions, which turn out to be a real invasive-species problem: “It recently reached Alaska’s Denali National Park, where park officials classify it as a highest priority exotic pest. Indeed, the dandelion has followed human travel to most corners of the world, including the U.S. and Canadian Rockies, the Chilean Andes, the Japanese and Australian Alps, and even islands off Antarctica.”

The patches of them on the Presidential Range were probably found early enough to be wiped out, although it’s hard to know for sure. But the battle against invasives is never-ending.