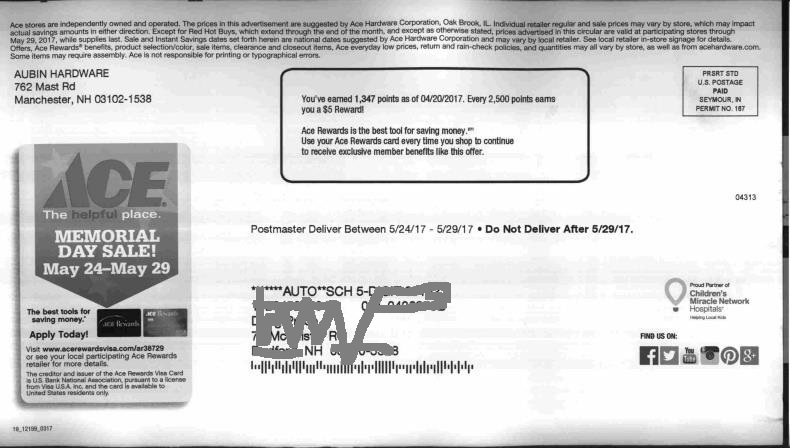 It’s not that I’m lazy, but there are days when I don’t make the 100-yard walk down my driveway to see what’s in the mailbox because – well, it’s 100 yards away. That’s like a dozen trips from the couch to the refrigerator.

I don’t miss out, however, because the Postal Service has started emailing me pictures of my mail.

You read that correctly: Every morning, deterred neither by snow nor rain nor gloom of night, the USPS sends me photos of the front of the letters that will show up later that day.

Don’t be jealous: They’ll do it for you, too. It’s a new, and free, service called Informed Delivery that launched nationally last month. (To learn more or sign up, websurf to informeddelivery.usps.com.)

This is also a good example of a company taking a technology created to do one thing – USPS photographs all letters as part of automated mail-sorting, which we’ll discuss in a moment – and using it to do something entirely different.

“We’ve been doing it (photographing letters) for quite some time. … Someone came up with the idea: Wouldn’t it be great if people could see this, too?” said Steve Doherty, USPS communications director for northern New England and Greater Boston.

Among the people who can see it is Doug Pryce of Bedford, who learned about Informed Delivery through a newspaper article and signed up on the first day.

Pryce, a friend of mine, had already signed up for email notification of packages from UPS and FedEx – a service that involves only announcements, not photos – so he thought he’d tried the post office version. He said it has proved more fun than vital, although he added that “it has been useful a couple of times.”

“When I received my new driver’s license, I saw it was coming in the mail that day, and made sure I saw the mailman so my driver’s license wouldn’t be out in the mailbox for a long time,” he said. Same thing when a new Social Security card was sent to him.

Plus, there’s this: “If it’s pouring rain, you don’t have to go out to the mailbox if you don’t need to.”

There are some limits to Informed Delivery – it doesn’t apply to packages, and it isn’t available to apartment dwellers who share a street address – but it seems to be a hit. The Postal Service ran a test in a few markets, and they were impressed, even surprised, with how many people used it, Doherty said.

“In Virginia, the (sign-up rate) was something like 65 percent of households – and 80 of those were checking it every day,” he said. The audience “kind of ran the gamut; it wasn’t really one demographic that signed up.”

I suspect that novelty is part of the appeal, and that sign-up levels in New Hampshire and elsewhere won’t be so high.

But if nothing else it’s interesting to see the U.S. Postal Service, an institution not known for cutting-edge innovation, rolling out something that is so intriguing.

My first reaction when hearing of Informed Delivery was surprise that the Postal Service was able to take photos of the millions of letters it handles every day. Pryce and I both assumed this was done for security reasons, to help law enforcement if there’s a mailed bomb or anthrax attack or something like that, but Doherty said it actually had a more business-like genesis.

USPS processing centers, like the one in Concord, use machines to sort letters before they’re distributed to local post offices and postal carriers. That requires optical-scanning devices to “read” the addresses.

Pictures are taken of each letter, Doherty said, because the optical scanner is sometimes baffled by handwriting or other flaws in addresses. In those cases, the picture is automatically sent to a person at an offsite processing center who reads it and types the address into the system, so that a machine-readable barcode can be put on the letter, allowing the automated processing to continue.

Cool, although also a little spooky. I’ll admit that learning of these photos triggered some privacy fears, even though the outside of envelopes aren’t really private. (The inside is another matter: Opening other people’s mail is a federal criminal offense.)

It is odd to know that somebody might be keeping track of every letter you receive, but Doherty said the pictures are not stored for any length of time and not used for some USPS database.

On a geekier level, the processing system sounds delightfully non-trivial. Mechanical high-speed handling of millions of irregularly shaped pieces of mail, including making sure that they’re facing the camera, seems really hard – which is why I’ve asked to get a look at the system in operation. Hopefully you’ll learn more in a future column, loyal reader.

In the meantime, let’s open my inbox and see what’s waiting for me when I get home from work. … Hey, it’s a circular from a hardware store! Be still, my heart.