Rise up, geeks, and demand that baseball be more like the Coriolis effect! 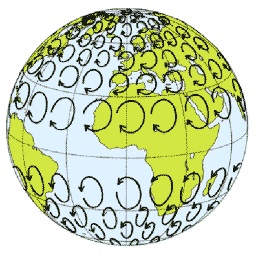 The Coriolis effect article. By Anders Persson via wikipedia

This column is for geeks, who like innovative ideas that upend stodgy old industries, so to celebrate Fourth of July wanted to come up with an idea that will upend something traditionally American.

Since mom and apple pie are fine as they are, I decided to upend baseball, which is certainly stodgy and old. I suggest we use the Coriolis effect.

No, wait – hear me out. This is actually quite brilliant.

It’s a simple change, but it would upend the whole game, turning the schlerotic tedium-fest of modern baseball into an exciting, direction-agnostic thrill.

If no other runner is already on base, when you get a hit you can sprint either to first base or to third base – your choice. Once on base, you have to continue going in the same direction for the rest of the inning, touching all four bases to score a run. And if a teammate is already on base ahead of you, you have to run the bases in the same direction that they did.

That’s it, but what a difference it would make.

Infielders’ jobs would become much more complicated – no more first basemen with the mobility of the Old Man of the Mountain – and outfielders trying to throw out base runners will have to develop a good memory for rotational geometry: Is that guy on second advancing to the left or right?

Batting will also be more complicated, with another whole set of decisions to make as that ball flies toward your head at 92 mph.

And new statistics – what joy! Sports-stats geeks will go crazy, divvying up the batting and fielding averages into clockwise and counter-clockwise categories, arguing endlessly and upending their fantasy teams.

Colorful baseball terms will blossom, too. I suggest we take a cue from the mnemonic for tightening and loosening bolts: Batters who like running the traditional pattern will be call “righty-tighty” and those who prefer running clockwise will be “lefty-loosey.”

I’ve even turned it into a song, demonstrating that I know the name of at least one famously hard-to-anticipate pitcher:

Will they run righty-tighty or lefty-loosey?

Or deciphering Ricky on “I Love Lucy”

Admittedly, this wouldn’t go over well with baseball purists, the folks who are still huffy about the use of designated hitters, synthetic fabrics and electric lights. But we’re geeks and we think outside the box (or, in this case, the diamond), so we don’t care about them.

We want innovation. We want novelty. We want to be less bored when we go to Fenway Park and whatever-it’s-called stadium in Manchester.

Is that too much to ask? Not in America, it isn’t!

Call the Major League Baseball commissioner (212-931-7800) today. The future of America’s pastime is in your hands.

David Brooks can be reached at 369-3313 or dbrooks@cmonitor.com.