The ‘baby bust’ is going to be a disaster. It’s our only hope 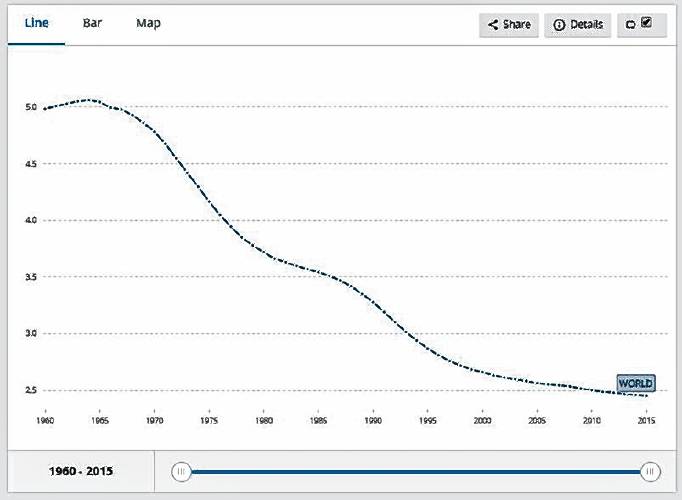 The most hopeful change in human society that has occurred during my lifetime – a change that must continue if our grandchildren have any hope of a decent life – is really bad.

It’s bad economically, bad socially, even bad culturally. But if you love your kids like I do mine, you’d better hope it continues.

I refer to the “baby bust,” a decades-old pattern in which people in New Hampshire, the U.S. and all around the world are having fewer children than their parents did.

It’s good because it means there will be a cap on the population boom, which we desperately need, but it’s bad because it underlies a basic assumption behind all human civilization: that we can always count on a growing supply of new workers, consumers, innovators, caretakers, soldiers and everything else you can think of.

Change that assumption and things get complicated, fast.

“That transitional period will be very difficult for any society,” said Ken Johnson, a demographer with the University of New Hampshire who is the state’s go-to-guy for analysis of all things related to birth, death and moving around.

As an example, he pointed to a relatively straightforward hypothetical: “We have 10 elementary schools but now we only need six. Which four are going to close?”

Straightforward but not easy, as many New Hampshire school districts know as they face enrollment decline.

New Hampshire’s problem is that we’re loaded with an ethnic group (mine, as it turns out) that increasingly shuns parenthood.

“The number of non-hispanic white births was smaller than deaths in New Hampshire, for the first time, in the last year,” said Johnson, who studies these things and teaches at UNH’s Carsey School of Public Policy.

Incidentally, this isn’t the same thing as the “silver tsunami” created by people living longer, although it’s related because our over-abundance of retirees is a bigger financial issue with a shortage of youngsters to support them.

New Hampshire is not alone in a decline in per-person baby production. Johnson recently quantified it as part of analysis of data from the National Center for Health Statistics which found that America’s birth rate hit a record low last year. (See details online at carsey.unh.edu/publication/snapshot/us-birth-low)

“In 2016, I estimate there were 600,000 fewer births in the United States than would have been expected had pre-recessionary birth rates continued. And there is no evidence in these new data that this birth dearth is diminishing,” he said.

If our long-term decisions about finance, infrastructure and local life depend on those kids showing up, we’re going to have problems.

This is an international issue. All over the world, as society becomes urbanized and big families no longer provide value in free farm labor, people have been putting off having children or skipping it entirely.

The global fertility rate, a measure of how many children a woman is likely to have during her lifetime, has fallen from more than 5 to less than 2.5 since 1960, according to the World Bank, and it is below the “replacement rate” of around 2.1 in scores of countries. (It takes more than two babies to replace two parents because boys are overly likely to die before they reproduce.)

The fertility rate in most of Europe is below 2.1 – sometimes way below, such as 1.4 in Greece. A number of East Asian cultures are also facing a birth dearth, notably Japan (also below 1.5), which started the trend before almost anywhere. It’s even happening in China, where the situation was fueled by the harsh one-child policy imposed to control overpopulation.

You can find the trend in the more developed areas of Latin America, Oceania and Africa. Even in places where population growth is still high, such as India and parts of the Middle East, the fertility rate is falling more quickly than anyone would have predicted a decade or two ago.

This doesn’t mean total population is falling except in a few places like Japan, because the number of women entering child-bearing age is still growing, a reflection of birth rates from two to four decades ago. This won’t last, however; one of these days the world will hit “peak baby” and the number of newborns will start to decline.

As much as I love kids, that will be a good thing.

The planet has about 7.5 billion people now, more than twice the figure when I was born, and in my kids’ lifetime will have at least 10 billion, a horrendous number.

The world just can’t cope with many more people trying to live comfortably; we are destroying our surroundings in the process. It has to stop or it will stop us.

A necessary, if not sufficient, condition of stopping it will be a baby bust leading to a world with a stable population.

“I think in many ways the system would be able to adjust to stability, if each generation was roughly replacing itself,” Johnson said. “But that’s a very substantial change in society … on economic levels, social levels, psychological levels. It will be very difficult.”

For example, he noted, “Imagine a society where nobody has any brothers or sisters. You’re talking about a very complicated set of inter-related phenomenon that has to be dealt with.”

Complicated and often unpleasant, and we will have to make unpleasant choices to cope – for example – not retiring as soon as I’d planned. As I said, bad.

But also, as I said, our only hope