The eclipse was a blip, but a noticeable one, for New England solar power 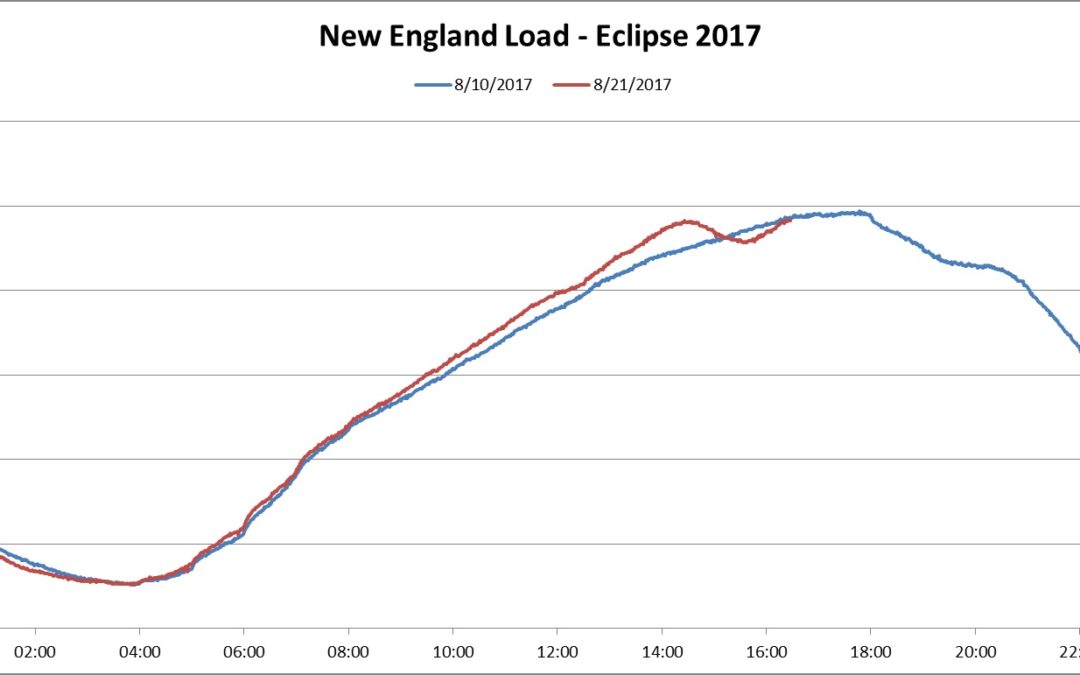 ISO New England, the folks who run the six-stage power grid, says the solar eclipse removed about 700 MW of solar power, or roughly a third of total PV output, at its height. That’s not musch out of total production by all power plants of almost 20,000 MW. This is from their release:

New England was partially under the shadow of the moon on August 21 between about 1:20 p.m. and 4:00 p.m. The region reached peak obscuration at 2:44 p.m., when about 65% of the sun was blocked. The ISO was prepared for a drop in output from the region’s 2,000 megawatts (MW) of solar photovoltaic (PV) systems and subsequent rise in electricity demand on the grid. The vast majority of New England’s solar power comes from small-scale, distributed systems connected directly to homes and businesses or to local utilities not to the regional power system. These systems reduce the amount of electricity demand system operators see on the grid when the sun is up; conversely electricity demand on the grid is higher when these systems aren’t operating.

However, three factors took place Monday that tempered the effect of the eclipse on electricity demand and PV output:

* Cloud coverage: High clouds over parts of the region reduced solar panel output for a majority of the morning leading up to the eclipse, which diminished any dramatic change that might have been seen on a cloud-free day.

The graph above compares the day’s demand curve to August 10, which was a very similar day weather-wise but without the eclipse. Electricity demand tracked closely for most of the day with demand then rising on August 21 as the moon began to partially cover the sun and PV output diminished. Estimates show that electricity demand rose about 700 MW due to the interruption in solar generation. The most striking effect on the demand curve was seen as the moon began to retreat from the path of sun. At around 2:45 pm, demand began to drop as solar panels started to produce electricity again.