I got to write a story with “death ray” in the lede! (It’s about a local company that makes laser safety equipment) 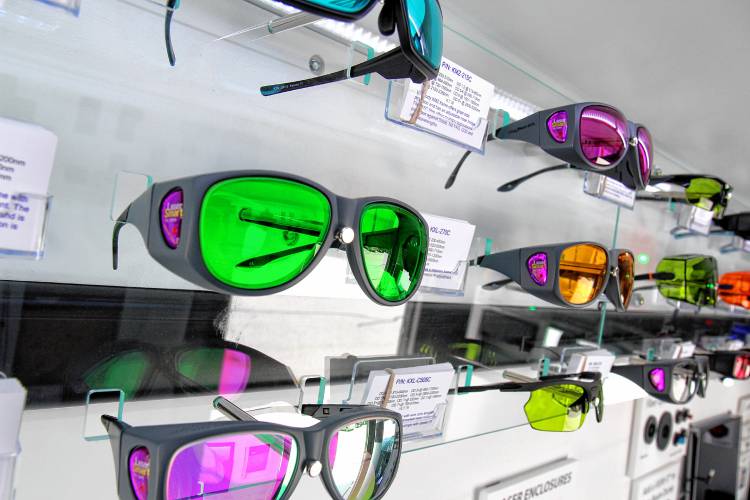 afety goggles that protect vision from different wavelengths and streths of laser take up a side wall of a demonstration van from Kentek, a Pittsfield firm that makes laser-safety equipment

If you want to get overly dramatic about it, you could say that Kentek, a company that has been in Pittsfield for 34 years, is in the business of protecting us from death rays.

Admittedly, most lasers in industry or research aren’t actually death rays, but they can certainly do damage, particularly to our eyes but also to skin and, indirectly through fumes released by drilling, to our lungs.

And because of their extreme usefulness – “lasers are appearing everywhere,” MacMullin noted – laser safety is proving to be good business.

MacMullin gave this explanation as part of a tour of the company’s new sales tool: A Ford Transit van that has been transformed into a traveling laser-safety show, both to pitch potential clients and to help existing customers figure out what they need. 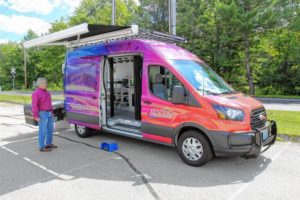 He and his son, Thomas, drove it 12,000 miles this summer, visiting 35 customers in 24 states, during which time “I probably shook hands with 300 different people,” he said.

It’s part of a new outreach by the company which, like many small firms, has to outmaneuver large competitors.

“Honeywell, they’ll sell 10,000, 20,000 of these at a time,” MacMullin said, holding up green-colored safety goggles that block certain frequencies of infrared light, and which are probably the firm’s most popular product. “I’ll sell five of them today. So we need to be able to be flexible for customers.”

Kentek, with 32 employees, is a successful small company that few people know about because it sells services or products to other companies rather than to the general public. New Hampshire is full of such companies: firms with millions of dollars in sales, scores of full-time jobs and years of presence in the community that similarly fly under the radar.

Kentek is even easier to overlook than many because very few of its customers are in New Hampshire. In fact, about 25 percent of sales happen overseas.

The firm was founded by a former Raytheon engineer, Mike Toepel, to service industries that use lasers, especially for optical and drilling tasks.

Lasers can be thought of as very specialized light bulbs. Visible light is made up of many wavelengths of the electromagnetic spectrum that overlap and collide with each other. Lasers create light with very specific wavelengths that are all in tune, vastly increasing power and other attributes. That’s why lasers can be used for something as blunt as drilling a hole through metal, as potent as sending a signal to the moon and back, or as delicate as aligning and guiding work on a microscopic scale.

Over the years, Kentek’s business has changed from selling laser equipment and now mostly sells items, training and services so firms can use lasers safely. Customers range from defense contractors to biotech labs to machine shops, and products range from goggles and protective curtains to face shields, crystals and laser alignment paper.

“It’s about 40 percent industrial, 25 to 30 percent research, and other uses make up the rest,” said MacMullin.

The van, which MacMullin largely designed and helped build, is a way for the small company to reach customers.

It’s got a funky purple exterior with the company logo – “I wanted that techy industrial look,” he says – and wouldn’t seem entirely out of place it if it was the mobile studio for a radio station.

Inside is a carefully designed space for demonstrations. There are racks of safety glasses with different optical densities, indicating which types of lasers they are safe to use with – “you always read the OD number, you never rely on the color,” MacMullin said – as well as types of protective curtains, window coverings, other types of glass, all with features as safety interlocks that prevent a demo laser from being powered unless the necessary doors or protective curtains are closed.

“This van is basically a big idea board. It’s very hands-on, for customer visits, trade shows. We bring the training to the customer, or ask them to find something that fits them,” he said.