Autumn was warmest on record in Concord 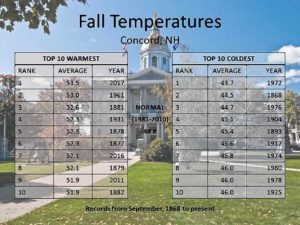 Remember how warm it was when the leaves started turning color? Your memory isn’t playing tricks on you: It broke a record.

September, October and November, the period known as “meteorological autumn” to weather watchers, was the warmest on record in Concord – and by a long shot, according to the National Weather Service .

The average temperature in those three months measured at Concord airport was 53.5 degrees, a half-degree higher than the previous record, set in 1961, and almost five degrees warmer than the average. Temperatures have been recorded in Concord since 1868.

The record was shattered even though November was a little bit colder than normal – about 0.3 degrees colder.

Portland, Maine, where our regional National Weather Service is based, tied the all-time warmest autumn on record this year. That city has had particularly toasty falls as of late: Its four warmest autumns have all been recorded this decade. However, that city’s weather records only stretch back to 1940.

Concord has seen no particular trend for autumnal temperatures recently; in fact, three of its 10 warmest falls occurred in the 1870’s and 1880’s.