“Gamification” teaches people how to be their own lawyer 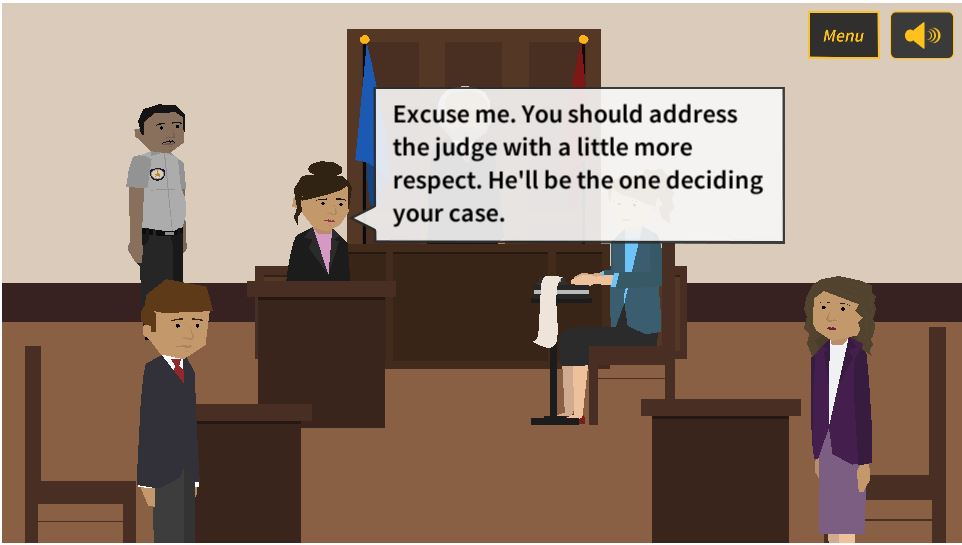 Let’s say you’re about to represent yourself in small-claims court, never having set foot in a courtroom before. Should you: a) Prepare your defense, or b) Line up a babysitter?

Trick question, according to a new game call RePresent (as in “represent yourself in court”) that you can play on your smartphone. You might need to do both.

“It’s about understanding what it means to go into court without a lawyer. You have to plan ahead, but what does ‘plan ahead’ mean? What do you need to plan for?” said Breckie Hayes, executive director of the Legal Aid and Referral Center, or LARC, who helped created the New Hampshire version of the game.

“People don’t realize how long it’s going to take, what it involves. They may not do things like getting a babysitter, getting a whole day off from work,” she said.

Seems obvious, once stated. But it was far from obvious in advance.

“What surprised me as we scripted this game are aspects I wouldn’t necessarily have thought of. I would focus on the legal aspect – what happens in the courtroom – but there are a lot of things that need to be done well before court … that people don’t think about: Making sure you’ve got transportation, making sure you’re got child care; making sure you’ve eaten breakfast to have good energy,” said Dan Jackson, executive director of NuLawLab, the “innovation center” at the Northeastern University School of Law, which helped develop the web browser and smartphone versions of RePresent.

The idea for the game in the first place came about years ago from Connecticut Legal Services, which is the Nutmeg State’s version of LARC. Like most legal aid organizations, it struggled to help its clients, many of them poor and none with any training in the law, handle the intricacies of court cases involving things like evictions, foreclosures, child custody and child support, and debt collection.

Private lawyers are often too expensive for such small-claims or family court cases and the number of lawyers working pro bono doesn’t begin to meet the need, creating a lot of what is known in legalese as self-represented litigants.

“We have a lot of written material that we can send people, but not everybody can effectively learn by reading a pamphlet,” Hayes said.

Eventually somebody had the idea of “game-ifying” the issue, to use a trendy term in industry.

Connecticut approached NuLawLab using various grants from the Legal Services Corporation, and over a couple of years a beta version was developed.

It was successful enough as a browser-only game that more grants were garnered (totaling well under a million dollars, all told, Jackson said) to develop a version for smartphones, which is where so many people live digitally these days. At the same time, New Hampshire signed on, as did Massachusetts and Maine. The browser version was rolled out in late December: you can try it atnhlegalaid.org/represent – links can be found there for the iTunes and Android version for smartphones.

RePresent is a “branched script” game, a sort of interactive version of old “choose your own adventure” books. It was built on a game-creating platform called Studycraft, which informed the characters’ appearance that Jackson described as “a combination of Minecraft and South Park.”

Writing all these various what-if scripts took a lot of work from a lot of people, including game design and law students at Northeastern as well as people in legal aid services who knew the obstacles faced by their clients.

“The concept of a branched script is a pretty straightforward thing – but when you start doing it, and have four different states you’re doing it for – it becomes very complicated, with many variables,” Jackson said. 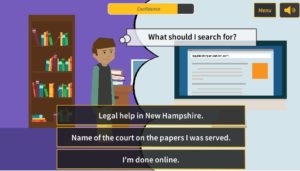 The result doesn’t seem complicated, which is a good thing. It takes you through a small-claims case in which a garage is suing “Mr. Player” over a disputed $1,000 payment. The options range from whether to address the judge as “dude” (hint: no) and what constitutes evidence. It won’t get you a paralegal certification, but it might help you win your case.

“I think using this is a much more interactive approach. It gives you the opportunity to say what you think and see how it plays out,” Hayes said. “For a lot of people, it’s going to be a more effective learning tool.”

The game appears to be so effective that a version is being developed for tenants, to help them with disputes with landlords.

“People who already have this information may look at (the game) as overly simple, may feel that we’re talking down to people. It’s easy to take that view when you’re somebody who understands that process,” Hayes said. “For me, anything like this I’m completely on board with.