In Boothbay, Maine, on a peninsula not too far north of Portland, they tried an experiment starting in 2013. To meet rising power demands, instead of building an $18 million transmission line they set up a bunch of solar panels and  batteries, expanded  energy efficiency, and tried other non-traditional methods include making ice to cut down on the midday load from air conditioning. It was a pilot project to see if such “non-transmission alternatives” or NTA can work to meet needs more cheaply than building power lines.

Here’s an early story about it from the Portland Press-Herald’s Tux Turkel. The NHPR podcast Outside/in visited in 2016.

The project wound down because it turns out the extra power needed wasn’t enough to require the transmission line in the first place.  The Maine Public Utilities Commission just released an analysis (you can get to it here) in which they said the whole took longer and was more complicated than they thought it would be and that more redundancy is needed.

Here’s a screen shot from the decision: 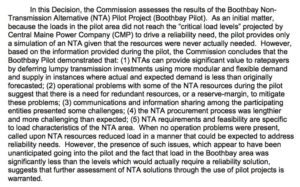