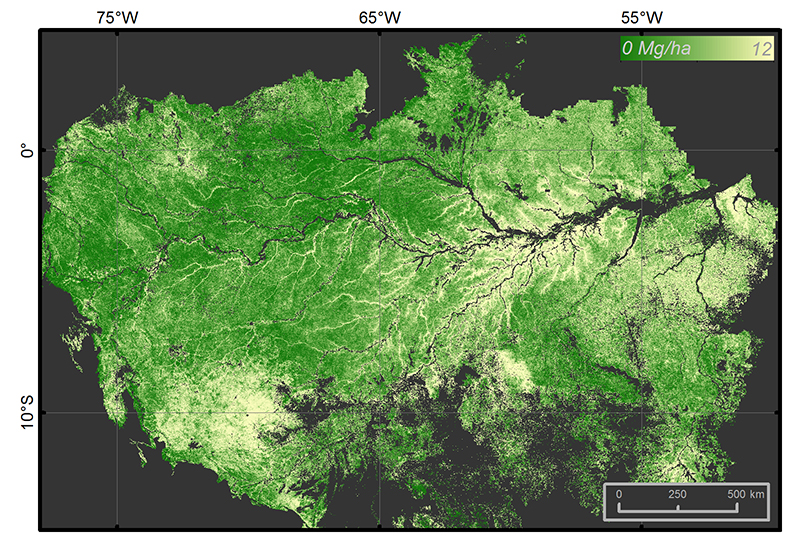 From UNH News Service: Tropical forests span a huge area, harbor a wide diversity of species, and are important to water and nutrient cycling on a planet scale. But in ancient Amazonia, over 500 years ago, clearing tropical forests was a way of survival to provide land for families to farm and villages to prosper. Researchers at the University of New Hampshire used high-tech tools to more precisely view where these cleared sites were and how much lasting impact they had on the rainforest in the Amazon Basin in South America.

“One of the key mysteries in this area of the world is that no one knows how many people lived in Amazonia before European contact,” said Michael Palace, an associate professor in the Earth Science Department and Earth System Research Center at UNH. “Once the Europeans arrived, indigenous populations were devastated due to disease, slavery and displacement so it’s often hard to determine lasting impact. It is important to understand the resilience or fragility of these forests to past human disturbance, which allows for appropriate planning on the use of natural resources.”

One of the few indicators of human settlements are the terra preta, or Amazonian Dark Earths (ADEs). These are black, human made soils that are enriched by materials left behind from past societies, pottery remnants, charcoal and other artifacts frequently associated with human origin. There is very little rock and metal in that part of the world (a former ocean bottom), and wood, bone and other organic materials decay quickly in the humid tropics.

In their study, recently published in the journal Ecosphere, the researchers used imagery from NASA’s terra satellite, MODIS, and geospatial modeling to predict the ADE probability across six million square kilometers of the Amazonia. They found that biomass (primarily weight of trees in forests), tree height, and tree cover were all lower at ADE sites than adjacent random non-ADE locations. The ADE sites were also more susceptible to drought.

Indigenous people most likely used slash-and-burn techniques to clear the forests so the ADE sites may have been pre-selected due to the propensity for drought or intensity of dry seasons. Researchers also observed differences in spectral properties (reflective light) between ADE and non-ADE sites that are likely driven by forest structure and tree species, indicating that remnant forests are still showing impacts from past human settlement patterns.

Researchers further explain that the high spatial heterogeneity in ADE sites across the Amazon suggests that pre-Columbian occupation by indigenous people was complex and varied substantially across this ecologically diverse region. But they speculate that because of their proximity to the rivers, ADEs may have become areas of interest for other groups to settle and reoccupy, further impacting the forests and vegetation in the ADE areas.