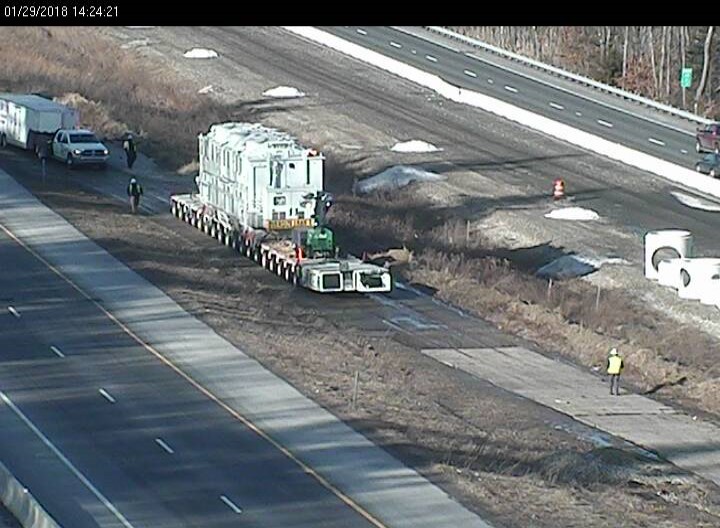 If you’re the sort of person who gets irritated when people drive slowly on the highway, good thing you weren’t on Route 28 Monday when Eversource’s newest transformer was trundling down the road.

“They go 5 or 10 miles an hour,” said Danny Cain, safety risk manager for Edwards Moving and Rigging. That Kentucky-based company supplied the 18-axle, 150-foot-long, self-propelled tractor which carried a 515,000-pound transformer from a Manchester rail siding to the the Scobie Pond substation in Londonderry (EDITOR’S NOTE: Not Derry, as originally stated; see comments below).

The tractor is officially called an 18-line hydraulic platform trailer because each segment can be hydraulically adjusted to keep loads level as it moves on hills or around curves. It can carry massive weights – the axles, five feet apart, are each capable of carrying 39,992 pounds, according to the N.H. Department of Transportation – and is powered by a diesel engine with more than 600 horsepower, although actually driving it can be done from a small computer tablet. 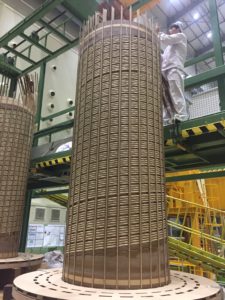 One of the cores of the recently installer transformer is shown being constructed at the Hyosung Power factory in South Korea last year. The cores are a series of wrapped wires that carry current, producing an electromagnetic field transfers energy to other cores at a different voltage, which is the main job of a transformer.

“If you were to get one out on the open field it can move, but obviously it’s not a toy,” said Cain.

“We do a lot of work in energy – nuclear plants, fossil-fuel plants, hydropower plants,” said Cain. “Lots of big items.”

Certainly the transformer was big, although by industry standards it is a normal three-phase transformer, purchased to replace a transformer that failed last spring.

The building-sized device was constructed in South Korea by Hyosung Power Systems, shipped to New Jersey, brought on rail via Albany, N.Y., and Springfied, Mass., to a rail siding in Manchester, where it was moved onto the platform trailer.  For several hours the trailer moved south along roads, mostly Route 28, to the substation, where was shifted over to a concrete pad.

“It takes about a day to set it up by jack and skid, with hydraulic pumps, onto the pad. It takes about three weeks to fill it with oil, dress it, connect it and get it ready,” said Chuck Christensen, lead substation engineer for Eversource New Hampshire. “Then we will get nine tractor-trailer loads of ancillary parts.”

The transformer, rated 450 MVA for mega volt-amp, a measure of what engineers call apparent power, is one of many on Eversource New Hampshire’s system. They won’t say exactly how many because Homeland Security frowns on releasing too much information about the power grid.

It switches electricity between 345 kilovolts, the level at which AC power is transmitted on the biggest long-distance power lives, and 115 kilovolts, a lower level that can be stepped down by smaller transformers for use in our homes.

These transformers cost between 3 million and 4 million dollars each, Christensen said. Obtaining one can be a 10-month process from the initial order: Three to four months of engineering, three to four months of construction, a few months to ship it here and get it all hooking into the electrical grid.

In fact, just shipping it the last few miles is quite a job. “It takes three or four months to plan these: You have to hire people to survey the routes, bridges, culverts, make sure it will work,” said Christensen.

The transformer is deliberately built to could fit under the 16-foot minimum high for wires to cross major roads.

“It’s pretty much the standard size in the New Hampshire system,” he said.