Eagles are getting so common in NH they are rubbing elbows 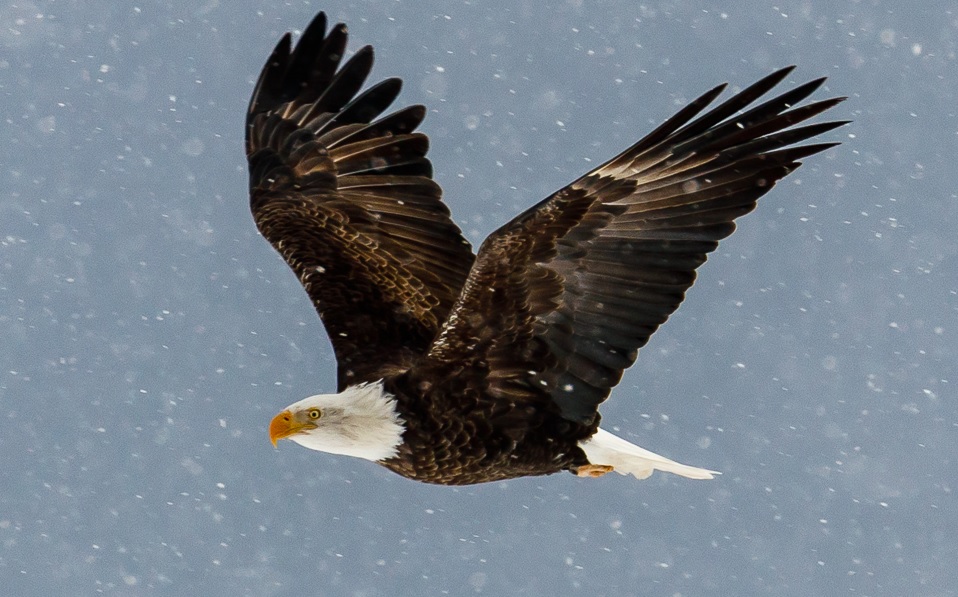 It used to be you had to go out West to get photos like this. This one was taken at Mirror Lake on the Pemigewasset River in Woodstock in January 2018. Jack Dorsey—Audubon Society of NH

There was a time, not that long ago, when bald eagles were so rare they could halt the biggest development project in the state by piling some sticks in a tree.

And while developers didn’t want to see them, they were a welcome sight for visitors, who would lug their canoes to far-northern New Hampshire in hopes of seeing the American symbol in a nest.

How things have changed. Now we’re all disappointed that weather dampened the annual midwinter count, so that only – only! – 97 eagles were spotted in the state.

At this rate, says eagle expert Chris Martin of New Hampshire Aubudon Society, we’re going to run out of eagle-nesting room, since this quarrelsome bird wants to have a good mile between roosting spots.

“Eagles are territorial, and it’s already happening, with more eagles bumping elbows with each other,” Martin said.

“And last year for first time in New Hampshire records, which are mostly since the 1950s … two different osprey nest sites – platforms that have long been used by ospreys – were taken over by bald eagle pairs. There’s a little intra-species battle going on there,” he added.

Martin has been working with bald eagle restoration efforts in New Hampshire since the days when you could count them on the fingers of one hand with enough fingers left over to text lamentations to your eagle-loving friends (although nobody was texting back then).

He remembers when an eagle nest on the Merrimack River in 2003 halted the multimillion-dollar construction of a bridge key to the new access road to Manchester airport, and when Lake Umbagog on the Maine border drew canoe-toting eagle fans because it had the first nesting site in the state.

“It has four nesting pairs now – basically one in all four corners of the lake,” he said.

The state Audubon chapter has been organizing a midwinter bald eagle count for 38 years. It gathers observations by volunteers over a two-week period, with most of it happening on one day.

The 2018 tally of 97 is a drop from recent years – numbers have been as high as 110 in 2015 – but that’s probably a reflection of the count rather than the population.

Bald eagles have been returning to large parts of the Lower 48 for years – they have always been numerous in much of Alaska – along with the resurgence of many raptors, from ospreys and hawks to owls.

The main reason for this good news (and, boy, do we need environmental good news) is that in 1972 the U.S. outlawed DDT. This is an excellent insecticide that has the unfortunate side effect of bio-accumulating in predators, and in raptors at the top of the food chain it resulted in weakened egg shells and lessened reproduction.

As DDT has disappeared from the environment, raptor numbers are returning to historic levels.

But it’s not just DDT, Martin said. It seems that raptors are shaking off the effect of other bio-accumulated nasty chemicals.

“If the things at the top of the food chain are doing well – that’s where toxins get concentrated … then for the question of toxins in our food, that’s a good omen,” he said.

The success of bald eagles, which enjoy eating fish more than anything (although they’re not above eating carrion, especially in winter) are also a reflection of how we have cleaned up our rivers and lakes.

To scramble an avian metaphor, bald eagles are canaries in our coalmine for a number of environmental issues. So their success reflects a number of improvements.

That doesn’t mean we don’t need a lot more improvement – take a look at the struggles of songbirds in New Hampshire, for example – but it does mean that we’re doing some things better than we used to.

“This is a guess – I’m a scientist but I don’t have any models, so I’m just guessing – but I think we’re going to top out at 140, 150 eagle pairs (nesting) in the state. At that point there will be so much conflict between nests that they’ll reach carrying capacity,” Martin said.

A hundred and fifty nesting pairs of bald eagles in New Hampshire? Not bad, not bad at all.