Blimp-as-cell-tower firm to do R&D in N.H.

Blimps are much cooler than drones, don’t you think? Of course you do.

So let’s celebrate the fact that an MIT-connected startup called Altaeros Energies is building a blimp hangar in Fremont, N.H. – halfway between Manchester and the Seacoast – to do R&D on their plan to use blimps as cheap cell towers in rural areas. The Union-Leader broke the story (right here).

That this is different than the balloons-bouncing-Internet project from Google, which sends balloons to the edge of space. Altaeros is experimenting with various blimp designs (including non-traditional ones, like that below) to create stable, relatively low level platforms for bouncing cell phone signals. 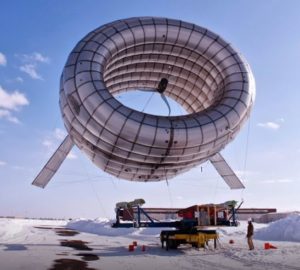