Why would a slowing of the Gulf Stream raise sea levels in New England? 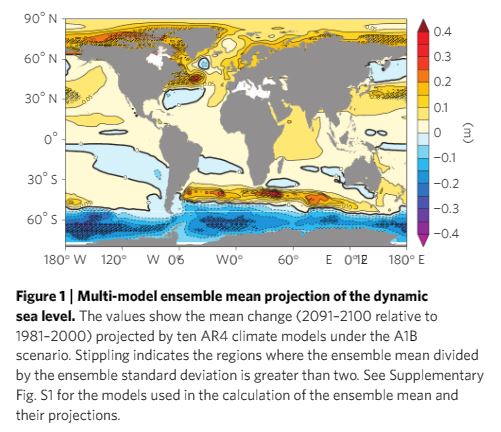 See that dark area off New England? Not good. (From Model projections of rapid sea-level rise" Yin, Schlesinger and Stouffer)

Among the various en-route-to-Doomsday scenarios that may occur as we humans thoughtlessly scramble the global climate, a big one involves changing the pattern of ocean movement in the Atlantic – the Gulf Stream and other parts of the Atlantic Meridional Overturning Circulation or AMOC. This mind-bogglingly massive circulatory pattern moves heat around and creates much of what we think of as “normal” weather in North America and Europe. It is changing, partly (maybe largely) because of huge amounts of fresh water flowing off melting Greenland and Arctic ice, changing temperature, salinity and other ocean factors.

You may have heard reports this week of two studies saying the AMOC is at its slowest in centuries and probably will slow further.

One obvious result of such a change could be to make Europe’s weather more like ours, as the ocean moves less equatorial heat up north. Rome is on the same latitude as New York City but has the weather of Florida; what if it didn’t? (This is the idea behind a Victorian sci-fi story called “The White Battalion” that I read as a kid; it imagines Nicaragua destroyed by a volcano; the resulting mingling of Pacific and Atlantic waters disrupts the Gulf Stream and Europe becomes Arctic.)

But there are other complications to a slowing AMOC, including this surprising one: It will raise ocean levels along the east coast of the U.S. This puzzled me, so I hunted around for an explanation and found this paper from 2009, titled “Model projections of rapid sea-level rise on the northeast coast of the United States”. I’ll admit I’m still a bit puzzled, but here’s what I think I understand:

Here’s how the paper puts it:

Model simulations suggest that a collapse of the AMOC could cause a large regional sea-level rise in the North Atlantic. … The projected ensemble mean (ten models) shows that the sea level rise during the twenty- first century is uneven, with some regions such as the northeast coast of the United States experiencing rises considerably faster and larger than the global mean. In addition, the northeast coast of the United States is a region where models agree in projecting the dynamic sea level.

So it’s not just that the melting glaciers will add more water to the ocean and raise it  – they will alter the way the ocean moves, increasing its local level even further.
Better visit Odiorne Point and other Seacoast historical sites while you can.
.