NH group has been selling disease-resistant elms for three decades 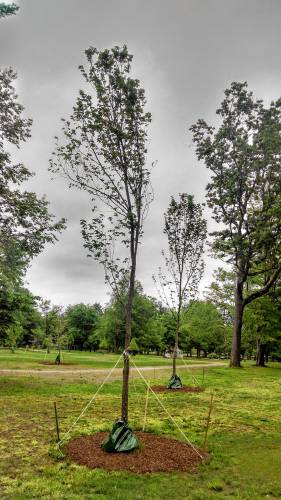 A couple of the new trees, at Rollins Park in Concord.

The city of Concord is now part of a long-running push by a Keene group to bring back the American elm tree from destruction, having planted 11 disease-resistant Liberty elms around the city.

The trees, each weighing about 1,200 pounds and standing 20 feet tall, were donated by the Concord Lions Club, which was spurred to move after the city had to cut down acres of red pine and ash trees in Rollins Park before they were killed by rampaging disease and pests.

“I saw in the newspaper that the city had to cut down all the trees, and we wanted to do something,” said Paul Young, former president of Concord Lions Club, who oversaw the gift. Six Liberty elms were planted at Rollins Park, two at White Park and three in Blossom Mill Cemetery.

Liberty elms have been bred and grown by the Keene-based Liberty Tree Society for three decades. They are less prone than most Americans elms to succumb to Dutch elm disease, a fungal disease spread by bark beetles that wiped out virtually all elms across the U.S. a century ago, killing an estimated 100 million trees.

Young admits that before he saw an ad for Liberty elms he didn’t know anything about projects to save threatened tree species by creating new strains.

“About 300,000 trees have been distributed since 1984, and less than five percent have Dutch elm disease loss,” said Yvonne Spalthoff, assistant director of the society.

The Liberty elm was developed by selective breeding of descendants of some trees that had not succumbed to Dutch elm, with generations chosen by how they reacted when they were injected with the fungus, resulting in what is known as a cultivar.

Several other Dutch elm disease-resistant cultivars are on the market, many developed by the U.S. Department of Agriculture through a similar process of starting with one healthy tree and breeding or cloning descendants. Some involve cross-breeding with Chinese elms. Chinese elms are disease resistant but do not have the classic “vase” shape of the American elm, that along with its ruggedness, made it a favorite of urban planners – which is why so many cities have an Elm Street even though they no longer have elm trees.

The elm is not the only tree species undergoing this process in an attempt to bring it back from the edge of extinction due to a single disease.

The American Chestnut Foundation has been cross-breeding American chestnut trees for decades to develop cultivars that do not succumb to a different fungus, which arrived here from Asia and wiped out the continent’s chestnuts in the decades before World War II. At least two groups of chestnuts are being field-tested in New Hampshire and some are in Concord, including six planted at St. Paul’s School two years ago.

New methods of genetic engineering hold out hope of more creating disease-resistant cultivars more quickly. That could help not just trees killed in the past but species threatened by diseases or bugs that have recently arrived in the U.S. Notably, an insect from east Asia known as the emerald ash borer is in the process of killing most, if not all, of North America’s ash trees by burrowing into them and spreading a fungal disease.

The Liberty Elm Society is a nonprofit that supports itself by selling trees – those in Concord cost $216 each plus shipping, which is not trivial for a tree that, due to its 3½-foot-wide root ball, weighs more than half a ton – and also sells commemorative plaques.

In celebration of the 400th anniversary of the landing of the Mayflower in the U.S., the society is coming out with a new cultivar, called Mayflower, that it says has been bred from a parent tree dating back to the 1700s.

All Liberty Tree Society elms are guaranteed not to succumb to Dutch elm disease.