Artist's conception of the Parker Solar Probe near the sun - NASA?JPL

UNH will have a role in the Parker Solar Probe that was launched Sunday by NASA. Apparently, however, NASA has hired the person who convinced Prince to change his name to an unpronounceable symbol because the instruments that UNH will be operating have been given an acronym that includes a non-text symbol, as noted in this report. (UPDATE: Check the Twitter discussion this comment produced, at the bottom of this article)

I’m quoting a bit here, replacing the symbol, which I don’t know how to reproduce in this WordPress site, with an asterisk:

The Integrated Science Investigation of the Sun—IS*IS, pronounced ee-sis and
including the symbol for the Sun in its acronym—uses two complementary instruments
in one combined scientific investigation to measure particles across a wide range of
energies. By measuring electrons, protons and ions, IS IS will understand the particles’
lifecycles—where they came from, how they became accelerated and how they move out
from the Sun through interplanetary space. The two energetic particle instruments on
IS*IS are called EPI-Lo and EPI-Hi (EPI stands for Energetic Particle Instrument).
Parker Solar Probe Instruments.

IS*IS is led by Princeton University in Princeton, New Jersey (principal investigator David
McComas), and was built largely at the Johns Hopkins Applied Physics Laboratory in
Laurel, Maryland, and Caltech, in Pasadena, California, with significant contributions from
Southwest Research Institute in San Antonio, Texas, and NASA’s Goddard Space Flight
Center in Greenbelt, Maryland. The IS*IS Science Operations Center is operated at the
University of New Hampshire in Durham.

Despite the typographic silliness, this is pretty cool.

And here is a Twitter conversation among me and some UNH folks after this item appeared: 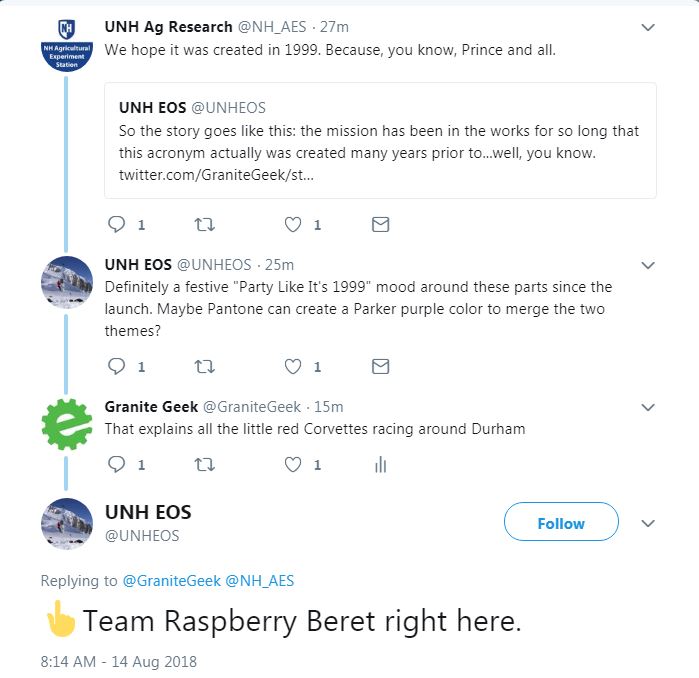