Mushrooms are bustin’ out all over 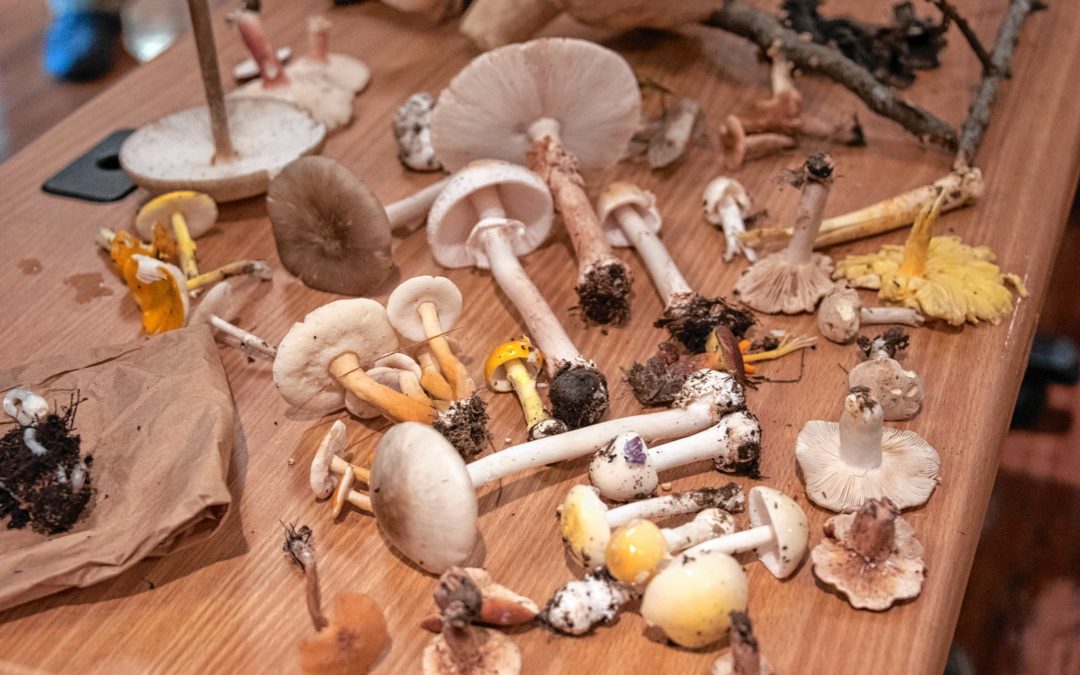 At the Gilford Library mushrooms from a mushroom walk are laid out on tables to be identified August 9, 2018. Photo by Maddie Vanderpool

If you’ve been outdoors in the past few weeks and it seems like the ground is suddenly sprinkled with little multi-colored domes, don’t be surprised. The dry start to the summer followed by consistent rains since mid-July have been perfect for luring mushrooms above ground, and these fungi have been sprouting in unusual number and unusual variety.

“I go outdoors three, four times a week. Two weeks ago I might have tallied about 30 species, and yesterday when I went out, the count was up over 100 species, for the same amount of time, same amount of effort,” said Rick Van de Pol of Sandwich.

Van de Pol, a wildlife consultant, is one of the state’s experts on wild mushrooms. He is one of the first people contacted by fire responders when there is suspected poisoning from eating a mushroom.

“I got my first couple of calls last week – one was a child, another was a dog. Fortunately, both of those were non-toxic,” he said.

The dog, by the way, was a black Labrador retriever, which didn’t surprise him at all.

“At least 90 percent of my calls (about dogs) are black labs. Black labs, they’re notorious for consuming mushrooms. It’s an odd trait for a canine,” Van de Pol said.

(For more photos from a mushroom-hunting walk sponsored by a local library, check the article on the Monitor website.)

“In really dry springs and then a deluge of mid-summer rain, that’s going to bring out a lot of species that might have been waiting to come out, especially with species that mainly fruit every five or 10 years,” he said.

Mushrooms are the visible portion of underground fungus that can be surprisingly big – in fact, the largest living organism on Earth is thought to be a fungus in Oregon that sends up mushrooms over a distance of more than two miles.

“They’re like the apple on a tree. It’s the fruit body of a larger organism,” said Milligan. The main job of above-ground mushrooms is to spread spores or seeds that spread underground fungus, which is known as mycelium.

“If there’s mycelium underground that has not produced a fruit body in a while, doesn’t have the right conditions outside to produce a mushroom that could produce spores, it just hangs out underground and waits for the opportunity. … Then if it comes along they’re like, ‘Wow, if I’m going to get my spores out, I’d better do it now’ and they put up a lot of fruit bodies. In a group that would normally be only one mushroom a year, 50 or 60 come out,” he said.

This summer’s crop, he said, is particularly notable. “They are all the colors of the rainbow, and different sizes, and every time you stop you find something new,” he joked. “On Sunday I picked a bunch of things I had never ever seen before.”

But he hasted to add that not all of them were exotic: “There are LBMs, which stands for ‘little brown mushroom.’ ”

New Hampshire Mushroom Co. grows as much as 1,000 pounds of mushrooms a week indoors on various wood substrates, such as red oak sawdust, and it also buys wild mushrooms from people. That gives Milligan another view on how many mushrooms have suddenly appeared.

“I usually can tell by the amount of people who call me and see if I want to buy mushrooms,” he said. “Right now I’ve got to turn a lot away. We got over 100 pounds this week.”